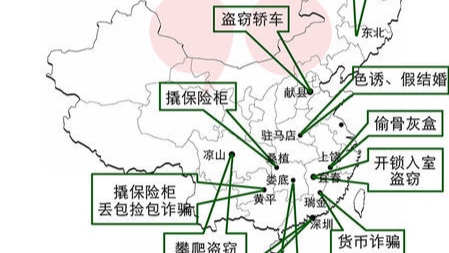 What kind of thief is the most crazy in your hometown?

"Beijing Public Security Bureau reminds you that frauds of acquaintances, online shopping and ticket booking frauds, and impersonation of public prosecution law agencies have alleged that various types of frauds such as cases have occurred, please do not ..."

When a certain type of crime occurs, an experienced investigator can almost immediately determine where the suspect came from. If an electric car and wires and cables are stolen, most of them are committed by local thieves; and the crazy theft is along the street.Stores are often suspects of Northeast origin, and high-end cars must consider the direction of Xianxian County, Hebei. The people who climbed the building by hand and almost stolen were almost certainly Liangshan people in Sichuan. The theft gangs who technically unlocked the rooms usually came from Yichun, Jiangxi, and Qinghai Hualong madeGun base.

The above cases are either specific or require higher-end tools special car decoders or skills excellent climbing ability, unlocking skills, etc., so it is easy to target specific hometowns. This type of suspicion of hometown distinctionPeople are called high-risk crime groups in the public security system. The area they belong to is called high-risk crime areas. As recently, the Guangdong Provincial Public Security Department dispatched more than 3,000 police forces to surround Boshe Village. The city of Lufeng belongs to China.A stronghold of drug production and trafficking.

In the eyes of outsiders, this analysis and classification may be suspected of regional discrimination, but it does meet the statistical data and the police's internal case handling experience. Generally speaking, the high-risk groups of crime are basically invading wealth by theft, fraud, robbery, etc.Crimes are dominated by crimes throughout the country. In recent years, these three types of crimes have accounted for more than 70% of all criminal cases.

According to the statistics of the Ministry of Public Security, the distribution of high-risk criminal groups covers almost every province, and Henan, Anhui, Hunan, Jiangxi, Guizhou, Guangxi, Hainan and other places are the most concentrated. These places not only have a large scale of high-risk criminal groups, but alsoThere are many types of crime and they can be innovative.

For example, Zhumadian, Henan is a high-risk area for superstition disaster scams, posing as military and police scams, lured by blackmail, fake marriage scams, Guizhou Huangping is a high-risk area for theft of safes, packet loss and pick-up fraud.High-risk areas of crimes such as money-picking scams, less money, more money scams, gold ingot scams, and ATM card theft. When a crime is widely known and the success rate is low, someone in these areas is responsible for designing newer crimesRoutine transmission, with research and development and innovation capabilities to counter the improvement of police investigation methods and social management level.

From the perspective of the times, the emergence of crime waves seems to be an inevitable problem in the process of modernization.

In 2012, China ’s urbanization rate has reached 52.57%, and the urban population exceeds the rural population. However, a large number of rural surplus laborers transferred to cities are difficult to integrate into the cities. Most of them have low education and lack vocational skills, and can only engage in low-income jobs.Low-tech manual labor. The high cost of living in the city and the strict household registration management system are equivalent to driving them out of the city. Under the double discrimination of policies and feelings, it is easy to produce serious frustration.

When the dream of integrating into the city was finally extinguished and there was no place to return to the hometown, on the one hand, it was for survival, on the other hand, due to the imbalanced psychology, many people took the initiative to commit crimes. They took the same township and kinship as a bond, and mutuallyTo impart criminal experience and to commit crimes in groups. Some people have been exiled all year round. Others have learned criminal skills and returned to their hometowns. They are taught to their relatives and friends, cross gangs, go out to commit crimes, return to the country to sell stolen goods and hide, and escape investigation under the clan cover.Fighting, the huge profits brought by crime continue to attract new forces to join, so a hometown of crimes of all sizes has been formed.

The phenomenon of high-risk groups of crime and regionalization of crimes is actually a logical extension of the types and specializations of criminal crimes. If this type of crime is considered as a special economic activity, it is not difficult to understand the formation of the crime hometown——The learning and teaching of criminal technology, unlike normal technology, can be obtained publicly. It relies heavily on the trust of acquaintances and relatives. The higher the technological threshold and the supporting criminal means of supporting systems, the stronger its regional monopoly characteristics.

On the other hand, the formation of the hometown of crime is also closely related to regional economic differences and specific people's conditions. For example, Luzhou is the largest county-level city in Hainan, with a large population and a complex composition. Hakkas and Li and Miao people live together.Poor law and order, yellow gambling and drug abuse, and underdeveloped economy are a gathering place for various types of high-risk criminals. Shenzhen and Guangdong-based cyber scam gangs have developed Luzhou into offline and base areas, hiring a large number of Luzhou youths to participate in crimes.And the division of labor is clear.

Loudi, Hunan is a high-risk area for telecommunications fraud, synthetic topless fraud and fake beetle and fake BRICS fraud. Telecommunication fraud was first introduced from Taiwan to the coastal areas of Guangdong and Fujian. Anxi in Quanzhou was once the base of such crimes, and the busiest base station in Asia isIt is located in Kuidou Town. Since the official key rectification since 2004, Taiwanese scam gangs have transferred their dens to Hunan.

Taiwanese scam gangs disappeared, and telecommunications scams were taken over by Loudi Shuangfeng suspects, and a more flexible single-armed combat model was developed. In the case of exiles in other provinces, equipment was transferred immediately after the success. Under the current investigation system in China,Criminal cases are under the jurisdiction of the public security organs at the place where the crimes are committed, and the places where such crimes are committed, where they are committed, their place of origin, and the location of the suspect are all different. The cost of handling such cases is extremely high and they are often unable to fight. At present, it has spread from Shuangfeng to neighboring counties and high-risk groups.The scale has been further expanded.

Shanghe County, Jinan is a gathering place for high-risk groups such as theft of cattle and sheep, motor vehicles, and fake cigarettes. Together with suspects in Xianxian County, Mengcun, Tianjin and other places, it has formed a huge theft of motor vehicle industry chain.Responsible for providing various types of high-end car decoders. Some people are responsible for selling stolen goods, and some people are responsible for stepping on points and providing crime targets. They have been highly gang-oriented and professional. A few years ago, they seized one hundred high-end stolen motor vehicles in a crime professional village.More cars. 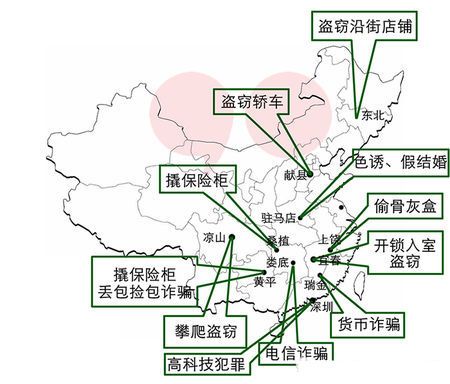 It is not difficult to see from the above analysis that crime-high-risk areas usually have the following characteristics: economic backwardness, large population, complex social order, and special public conditions. Especially the last one directly determines the characteristics of each crime town.

The three provinces in the east are not backward as traditional heavy industry bases, and a large number of people go south to seek livelihoods. In the northeast, there are fewer high-risk areas in the northeast, and the people in the northeast have a bold and straightforward personality, less fraud, more violent crimes, and occasionally high-risk groups of wealth infringement.It is also based on smashing car glass bags and stealing shops along the street with a safety hammer.

Henan and Fuyang, Luzhou, and other places of high-risk groups are mainly traditional scams, low-tech content, and most of the targets are middle-aged and elderly farmers with low education. Developed cities adjacent to Hong Kong and Macao, such as Shenzhen and Guangdong, focus on high-techCrime, which focuses on the use of emerging telecommunications and network platforms to carry out fraud and theft, belongs to the upper reaches of the criminal industry chain, and radiates a large number of high-risk groups in surrounding provinces and cities, and its crime mode has less direct contact with the victims, and personal danger.low.

A prominent problem is that in these high-risk areas, not only is there no moral burden for the thieves and theft, but it is the envy of the villagers. In Huangping, Guizhou, young girls favor men who make money by prying out safes.Ji Shoufa is often looked down upon at home for farming.

Subject to many factors such as population, resources, geographic location, and industrial policy and economic policies, China's interregional economic development is uneven, and the central and western regions lag far behind the economic clusters of the southeast coast and north-shanghai-guangzhou. The urban-rural gap and the regional gapTo balance the sense of deprivation with crimes even has some kind of "legitimateness". High-risk areas and people "integrate" into the social division of labor in such an extreme way, forcibly redistribute income and compete for survival resources.

Look at a set of data: in a year, 73,336 criminal cases were jointly established in Jinan, Shandong Province, of which 43,634 were committed by foreigners, accounting for 59.5%; 17,196 suspects of various types were arrested, of whom 8,258 were foreign criminals, accounting for 48%Among them, 5,818 criminal suspects from other provinces were arrested 1204 from Northeast China, 803 from Anhui, 731 from Henan, 679 from Jiangsu, 653 from Guizhou, and 614 from Yunnan. Migrants from Beijing and other placesCrime even accounts for more than 80%-to a certain extent, crime has become an alternative way to get rich first in China.

Probably, the most likely form of crime our readers will encounter is telecommunications fraud. If you want your family to be protected from telecommunications fraud, you can tell them to respond in this way-if you encounter a self-proclaimed bank,The phone call from the insurance and economic police can say to the person with a slight southern accent: "Onzensang Huleg", maybe she will remember the fellowship of her fellow villagers or think she will meet you and let you go.

Elephant Guild | Knowledge, insights, and knowledge, the best dining table to talk about, and know the training base of the elements. Wechat search "Elephant Guild" idxgh2013 to receive more fun content.

Elephant Guild
Knowledge, insight, and knowledge, give you the best table to talk about, and know the molecular training base. Official Wechat idxgh2013

Elephant Guild
Knowledge, insight, and knowledge, give you the best table to talk about, and know the molecular training base. Official Wechat idxgh2013