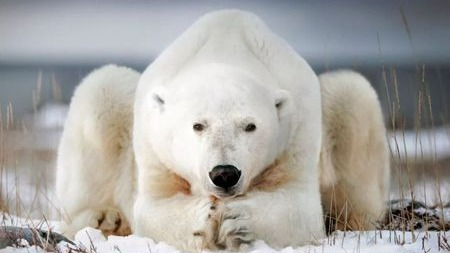 Of the 19 polar bear populations, 11 populations still have insufficient data statistics. PBSG cannot really give the exact answer to the overall change trend, so this time it carried the media that kept asking and only gave "Different populations have different conclusions. However, it is precisely for this reason that predictions about the future of polar bears, such as "stability", "growth", "decrease", and "extinction", have appeared on various mainstream media, allowing the publicNo idea at all. 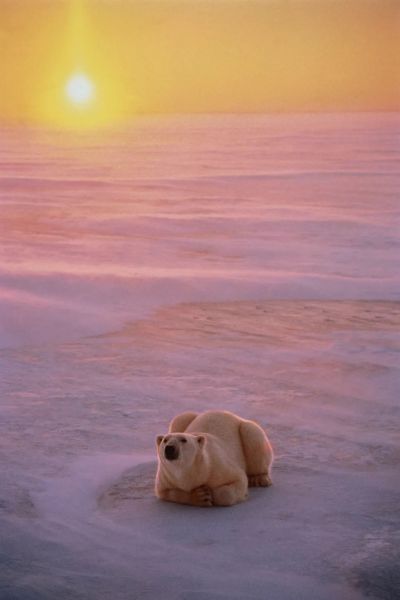 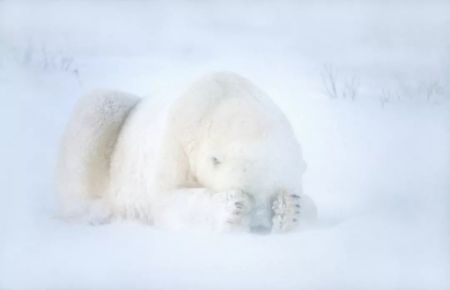 In the snow, polar bears protect their eyes with their paws. Photo / Wayne R Bilenduke 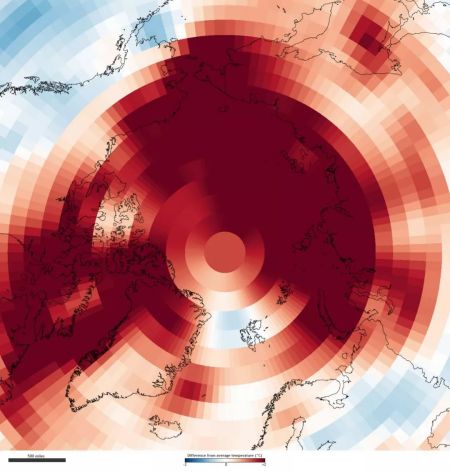 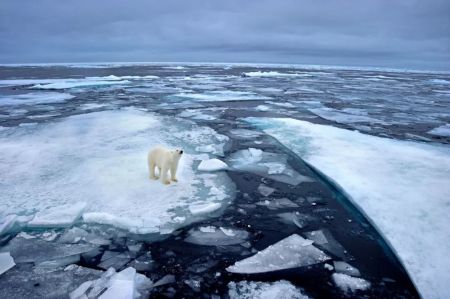 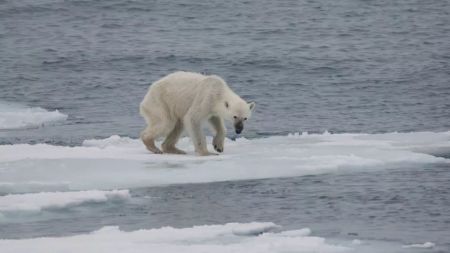 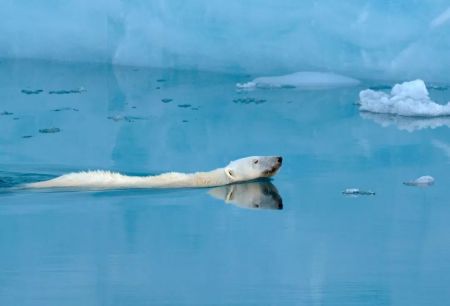 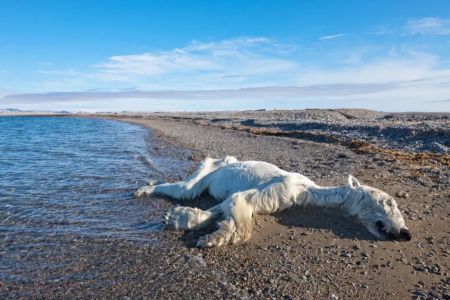 Polar bears are in a much better position than you think.

Hungry polar bear stared desperately at the shore for a long time without freezing. This world's largest terrestrial carnivorous animal is now hungry into a dog. It even climbed to the cliff regardless of the risk of fallingEating bird eggs that don't have much energy, or breaking into human living territory to find garbage, a small piece of leftover hamburger meat, a little frozen iced yogurt are rare foods. 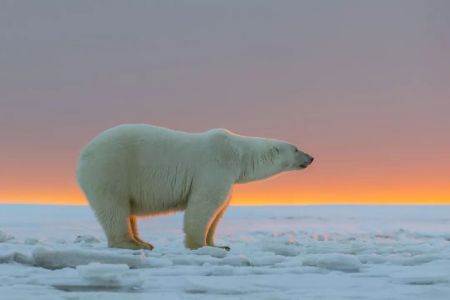 The bear's paw that "touches the head" is not only huge, but its claws are also extremely sharp. Photo / Daniel J Cox 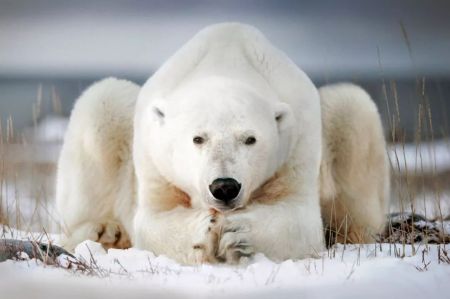 The tragic life of polar bears, with the spread of television signals to millions of households, has moved the hearts of people around the world, and it has become the "ambassador" and "sacrifice" of climate warming.

Apart from sadness, we can't help but ask: Polar bear, are we really extinct?

150,000 years ago, perhaps due to the decline of the glacier, a more cold-resistant bear living in Ireland has left from the habitat of their relatives, brown bears, all the way north, and gradually evolved into what it is today.Polar bears became "masters of the Arctic." 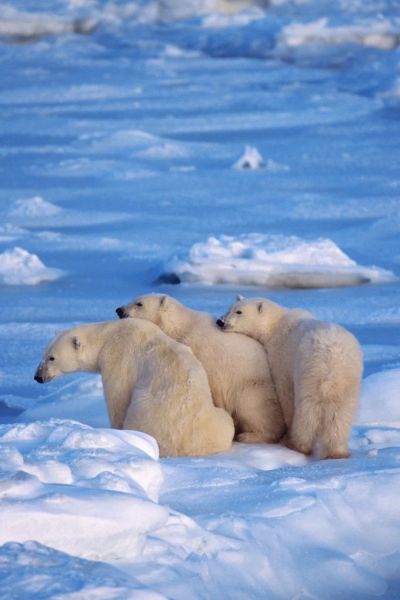 The coldness of minus 40 degrees Celsius, and the high winds of 120 kilometers per hour, in such a harsh environment of the Arctic, in order to survive, polar bears have done their best to eat and wear warmth.

Polar bears are also called "white bears" because their bodies are white, but their skin is actually black, which can absorb heat more effectively. Under the skin, there is a layer of fat about 10 cm thick, which blocks heat and stores it.Energy. Outside the skin, the polar bear "wears" two layers of "clothing": the inner layer is a 5 cm thick and dense sweater, and the outer layer is a 12 cm thick fur coat. If you look at a polar bear under a thermal imaging lens,Except for the face and ears, its other parts are completely consistent with the ambient temperature, and almost zero heat loss is achieved.

Polar bears appear to be very “local tyrants” in eating. The main food of polar bears is ringed seals. Generally, they only eat seal fats and ignore the lean meat. This habit is not a waste, but a survival.skill.

An adult polar bear consumes 16,000 calories per day, which is almost a person's calories for a week, so for them, eating and storing fat is the key to survival. An adult ringed sealFat, which contains about 100,000 calories, digests fat quickly and allows polar bears to stick fast. It is the most efficient choice. In order to gain weight, the polar bear's cardiovascular system has undergone an important structural reorganization, allowing it to be used in large amounts.After entering fat, it will not cause heart disease. Compared with fat, lean meat has low calories and slow digestion. If it is not food-starved or hungry, these lean meats will be left to Arctic foxes and other "hard brothers and brothers" who also live in the Arctic". 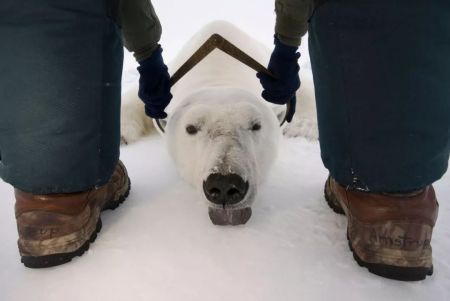 The Arctic snow and water are extremely cold. If you drink it, you need to consume more energy to heat it, which is not a wise choice! Therefore, the water required by polar bears mainly comes from the digestion of fat. Break down lean meatThe protein in the water requires the participation of water, which consumes valuable water in the polar bear's body. This kind of thing does not do the polar bear.

The Arctic is not rich. The ring seals most commonly eaten by polar bears are only 2.5 per square kilometer, and between the polar bears and the seals, there is almost 1 meter of sea ice across., It's so hard to eat. 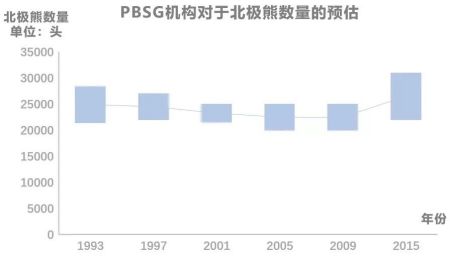 In order to eat seals to survive, polar bears evolved the world's most sensitive sense of smell: it can smell seals on the ice 32 km away or under the ice 1 km away. In addition, polar bearsHe also has hearing skills. Unlike human beings who can only judge the direction of sound, it can accurately position the sound source to within 1 degree. 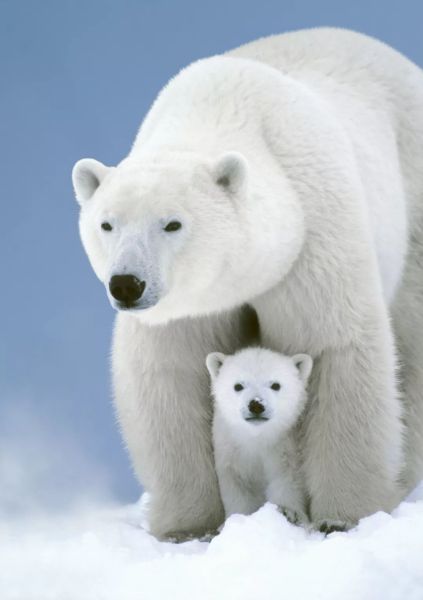 Polar bears need to use sea ice to hunt ringed seals, because it ca n’t catch up with these guys in the sea. Ringed seals are mammals and must return to the water to breathe, so it will dig out several on the frozen seaThe hole serves as a breathing hole, and the polar bear's strategy is to stay on a hole and wait. In order to prevent the seal from detecting its position, it can stand still for 4 hours in the snow and snow. This method, although it seems to have a chance of successIt's small, but it's actually the least laborious.

When the seal floats up to breathe silly, the polar bear will use its bite stronger than the lion and more than 200 kilograms of force to give the prey a hit and kill. ”The five benefits on its feetClaws, each 10 cm long, can easily drag seals onto the ice with one hand. Important calories are finally guaranteed! 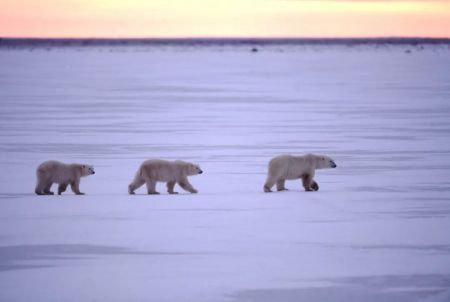 The number of these hungry animals is increasing. Figure / Andreas Weith / CC BY-SA 4.0

Polar bears can squat for 4 hours without moving in the snow, just to give the seal a fatal blow. Picture / SJ Krasemann

The life of a polar bear is a cycle between meals and fasting. In the long summer without sea ice, it relies on berries, animal carcasses, bird eggs, and mushrooms to survive. In order to survive food shortagesOn difficult days, the fat stored in its body can support it for 12 months without eating, of course, the process of starvation is not happy at all, just to ... survive.

Talking about polar bears, the topic that will never get around, is climate change. For decades, the Arctic temperature has been rising, and with it, there has been a shrinking sea ice range and shorter and shorter ice seals.time.

The life of polar bears is closely connected with sea ice. Here is the hunting ground on which polar bears live. With less sea ice, they are more likely to starve. Photos of polar bears have almost become the credible evidence and symbol of climate change.

Early in 2019, the news that more than 50 hungry polar bears broke into Russia's Xindi Island in search of food spread instantly throughout the world. I believe that the first feeling of many people when they heard the news was: let this group of furry guys eat.Let's be full.

Polar bears living in northern Russia are indeed more likely to suffer from hunger. Every summer, they will helplessly watch the sea ice gradually recede northwards. If they stay on the shore, they can only starve to autumn, etc.Return slowly with the sea ice. If you want to follow the ice line and eat a few more meals on the ice that is constantly retreating from the north, you must seize the opportunity to swim back to the land, otherwise the more north you are, the more nutrients the Arctic Ocean can provide.Less, waiting for them is likely to be a worse living environment. The warming of the Arctic has a greater impact on polar bears in these places, the ice walks earlier, returns later, and the hungry and thin polar bears look forward to the seaBing Pan is looking forward to wearing ...

Since the polar bear is not in danger of extinction for a while, it is so far away from us, and it is difficult to study, why is it still receiving such widespread attention?

National Geographic Book of China
How many polar bears are there in the world? The world's most authoritative polar bear research organization, the Polar Bear Science Group PBSG under the World Conservation Union IUCN, gives their latest data: 26,000. But thisThe number is actually the middle value of the range of 22,000 to 31,000 heads they predict, and it is not accurate. Therefore, institutions around the world will "interpret" different results according to their own needs.

For the general public, the theory of global warming has been deeply rooted in people's hearts although human activities may not be the decisive factor. Why did the cute and furry big guys suddenly become skinny?Although this may have been shown to you deliberately by the media. It allows us to be more sure about the importance of energy saving and emission reduction while being compassionate, which is indeed a good thing from a certain perspective.

For scientists, polar bears are living creatures at the top of the Arctic food chain. Monitoring them can give a more acute insight into the changes that are taking place in the entire ecosystem reflected by it. More importantly, just like this year's people areJust as plastic particles have been found in the Arctic, what happens in the Arctic will also have an impact on the world and may change our way of life.