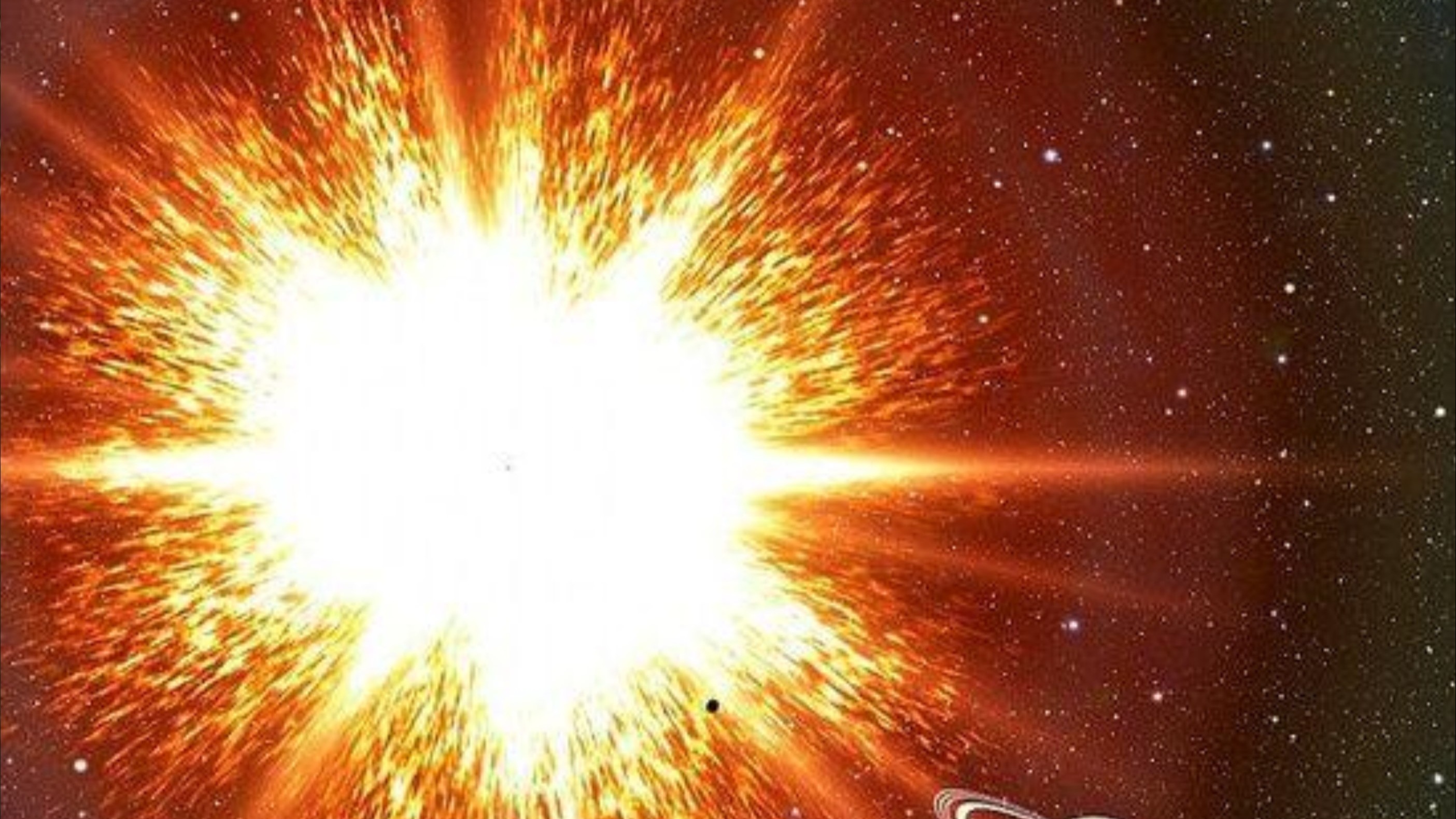 A small spoonful of neutron star material comes to the earth, will it burn out in the atmosphere, or will it smash through the earth?

This article is based on answering similar questions from netizens.

Neutron star matter is inseparable from the neutron star environment, and it will not come to the earth. Therefore, there is no problem of burning it out. There is no solution to this problem.

Neutron stars do not belong to the category of ordinary stars. They are the remains of stars after death, or they can be said to be corpses. There are four types of stellar corpses, namely black dwarfs, white dwarfs, neutron stars, and black holes. Black dwarfs are the corpses of small-mass stars red dwarfs.Red dwarfs have an extremely long life span, and no such corpses exist yet; white dwarfs are the corpses of small and medium-sized sun-like stars. There are many in the universe, accounting for about 10% of the total number of stars. Neutron stars are 8 to 30 times the mass of the sun.The corpse of a star, a black hole is the corpse of a star whose mass is more than 30-40 times the sun's death. 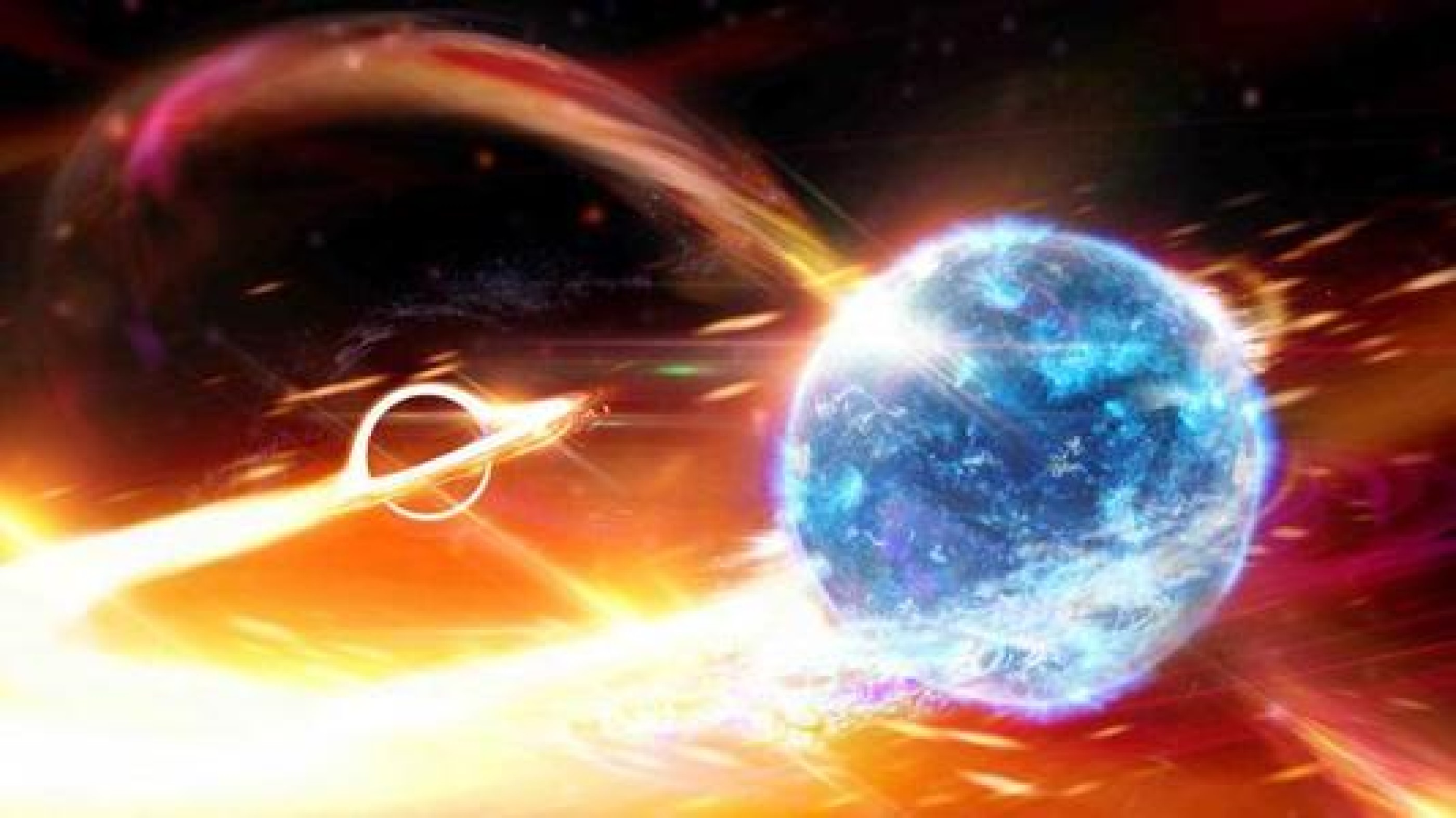 The so-called degenerate state means that under extreme pressure, the atoms that make up the normal matter of the earth are crushed and become a special dense substance. The atom is originally composed of an atomic nucleus and peripheral electrons, and the atomic nucleus occupies 99.96% of the mass of the atom, The volume is only hundreds of billions to one trillionth of an atom.

This means that there is a huge space between the nucleus of the atom and the shell of the electron, so that as soon as the atom is crushed, the matter becomes very dense. This is the reason why the material density of white dwarfs and neutron stars is extremely high. 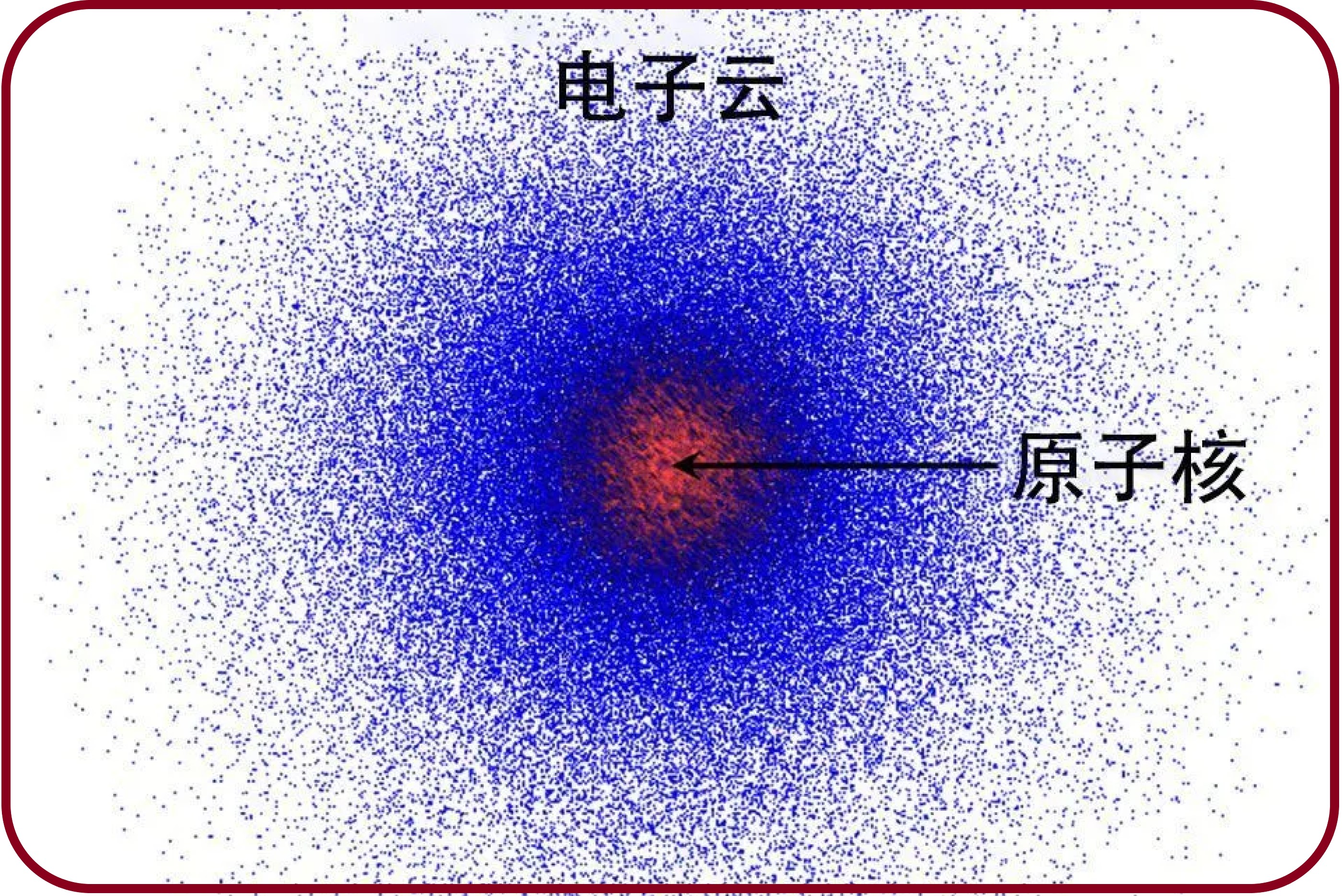 According to the Pauli exclusion principle of quantum mechanics, fermion particles have mutually exclusive properties, just like children who are unwilling to squeeze together when playing, they repel each other when they get close. Electrons, protons, and neutrons belong to fermions.Particles, so when the electron shell of the atom is crushed, these elementary particles repel each other and try not to let everyone move closer to each other. This mutual repulsion will create a kind of pressure, which is called degenerate pressure.

The deeper the degeneracy pressure, the greater the depth. White dwarfs rely on the degenerate pressure of electrons to support the huge gravitational pressure, that is, the electron shell of the atom still exists, but it is compressed to a certain degree.The incompatibility between the two forms a certain supporting force, which resists the gravitational pressure and keeps a certain space between the nucleus and the electron, and the nucleus remains intact. In this way, the density of the white dwarf is only 1~10 tons/cm^3. Relative to a neutron star, it's a big difference. 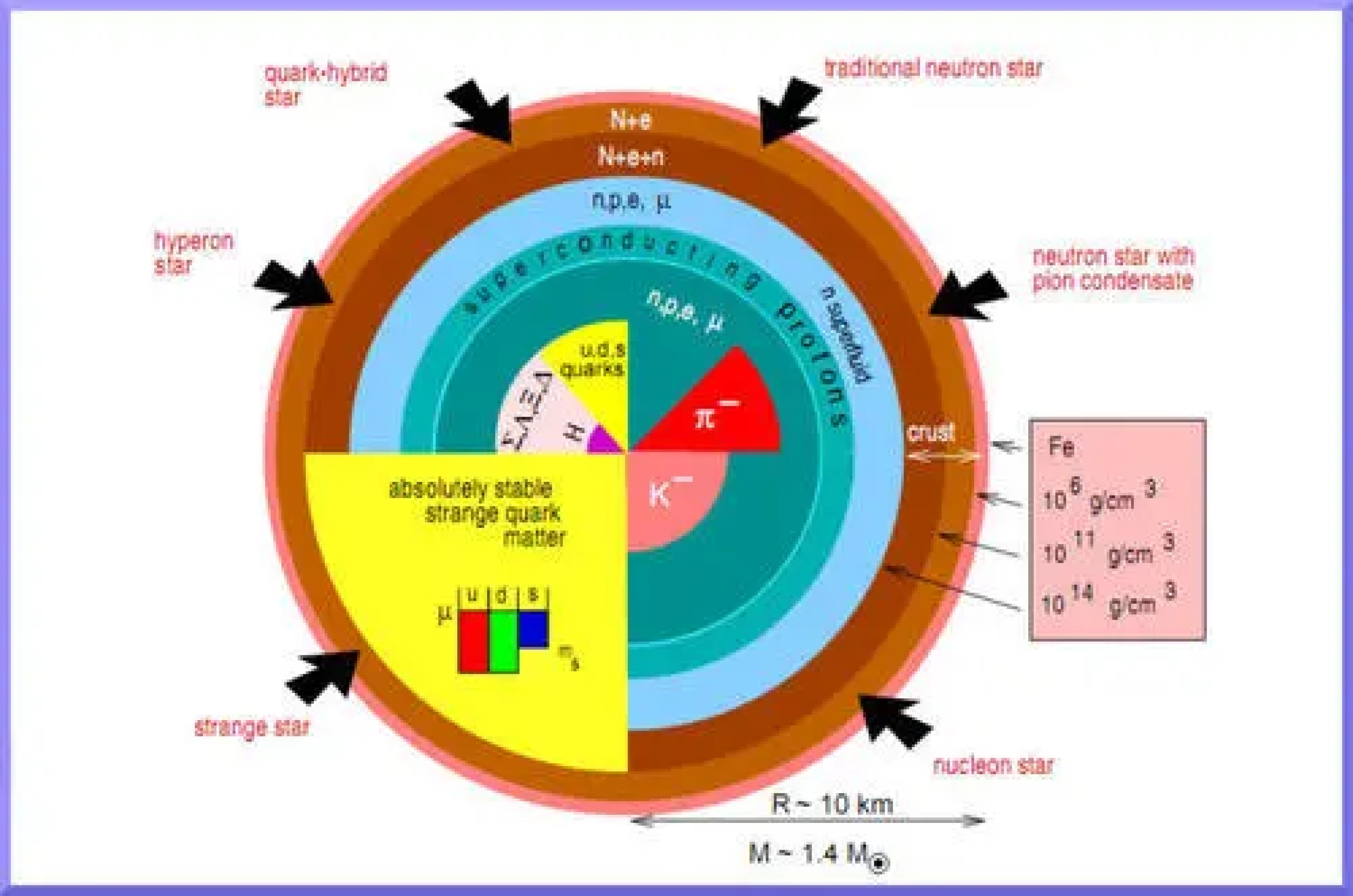 The electrons are negatively charged, the protons in the nucleus are positively charged, and the number of electrons in the periphery of the atom is exactly the same as the number of protons in the nucleus, so that when the positive and negative charges are neutralized, the protons also become neutrons. The nucleus is originally a neutron and protons rely on strong forceBundled together, now the protons have also become neutrons, and the entire planet has become a large neutron nucleus composed entirely of neutrons. Therefore, this planet is a neutron star. 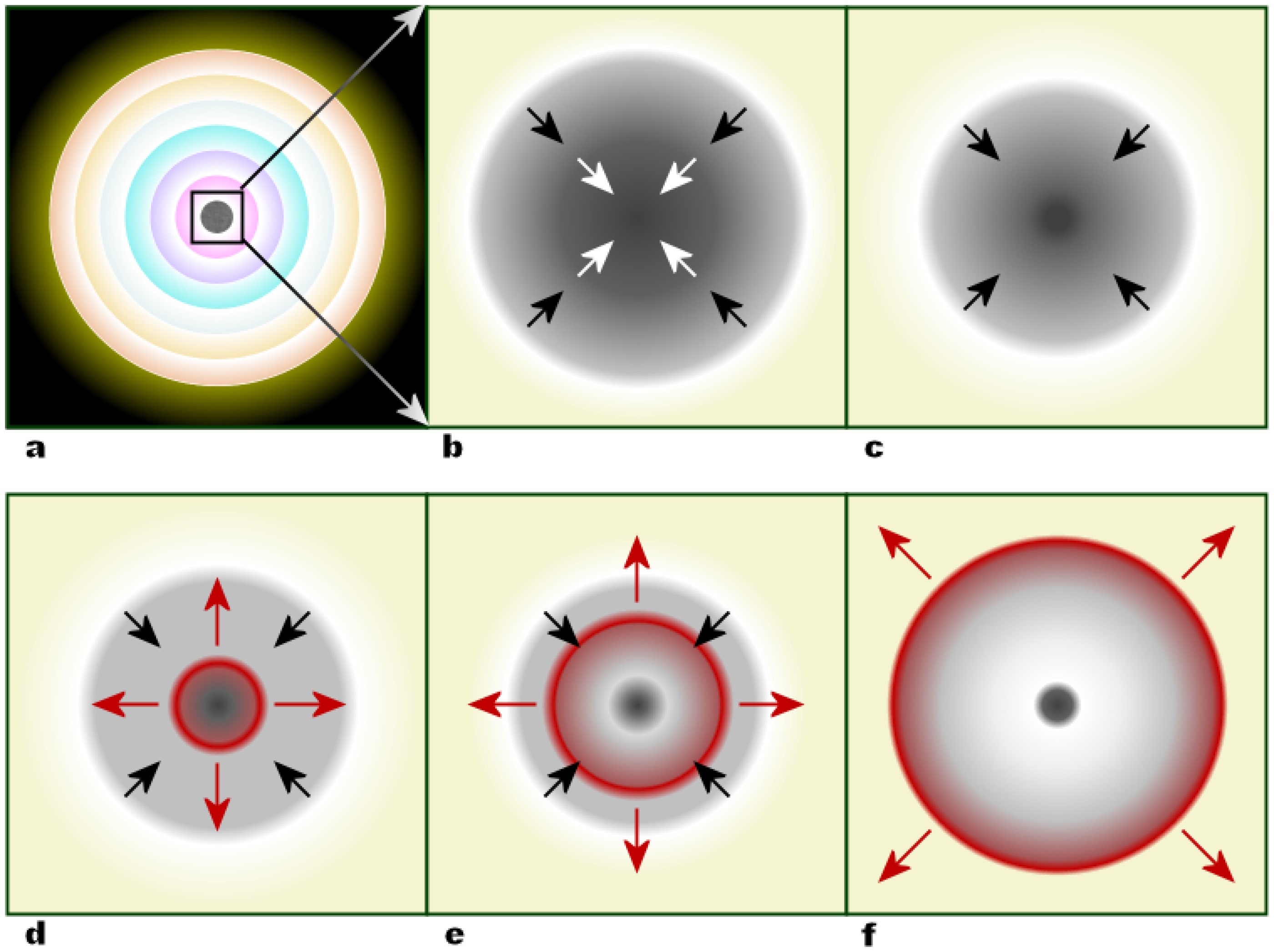 The volume of a white dwarf is about the size of the earth, and the mass is more than 0.5 times to less than 1.44 times that of the sun; the mass of a neutron star is more than 1.44 to about 3 times that of the sun, but the volume radius is only about 10km, so the density is much higher than that of a white dwarf.It reaches about 1 billion tons and 1 cubic centimeter.

The mass of a neutron star is greater, reaching the Oppenheimer limit, which is about 3 solar masses or more, this kind of neutron degeneracy formed by the repulsion between neutrons cannot support the strong gravityIf it is compressed, it will be suddenly compressed. The professional term is to collapse or collapse, becoming a quark star supported by a deeper degenerate compression, or directly collapsing into a black hole. 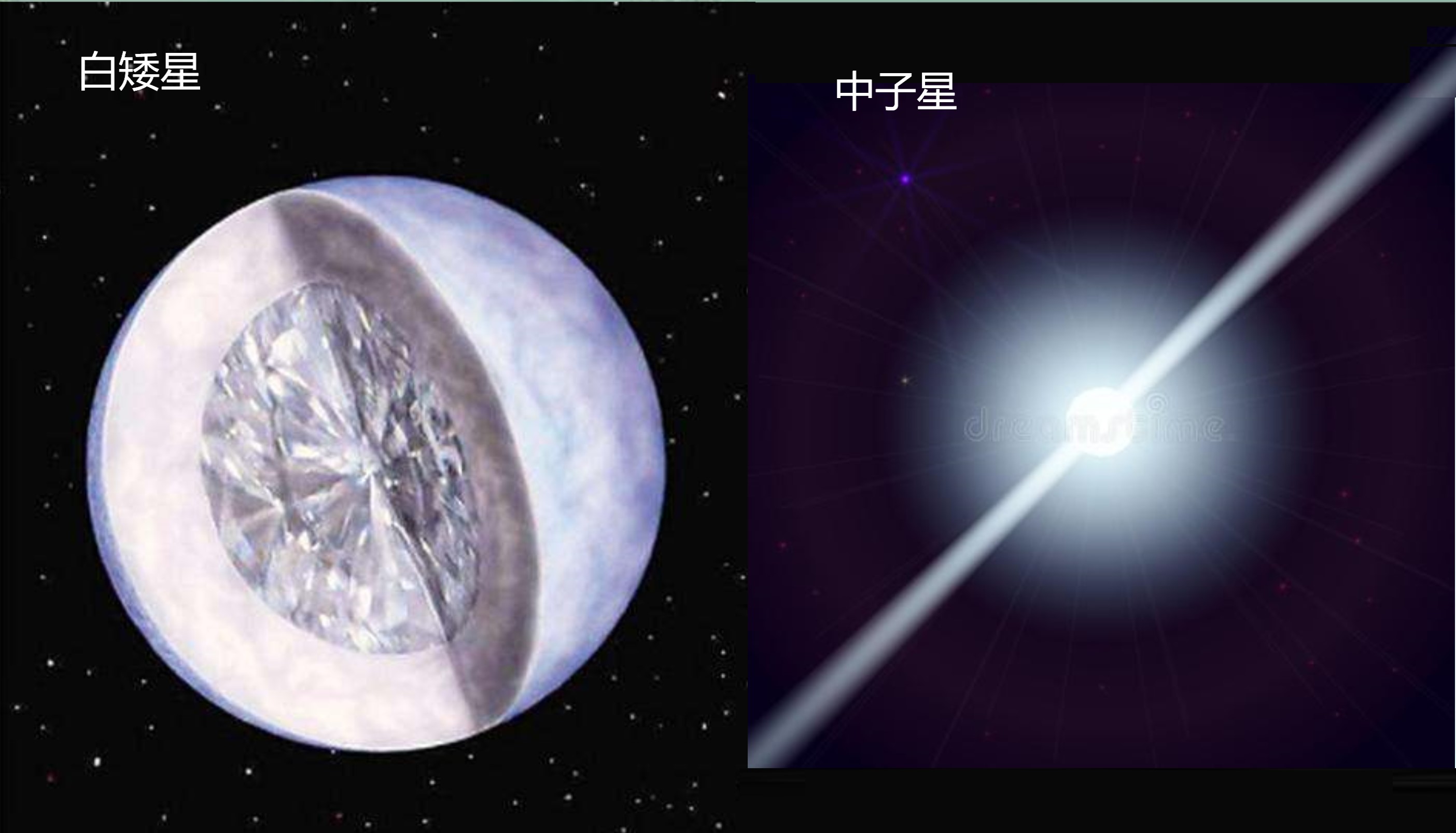 So far, people have not discovered the existence of quark stars, so it is generally believed that the mass of neutron stars beyond the Oppenheimer limit will directly collapse into a black hole.

The so-called Chandrasek limit and Oppenheimer limit, as well as the Pauli incompatibility principle, have been introduced many times in past articles, so I won’t repeat them here.

From the conditions for the formation of white dwarfs and neutron stars, we can conclude that neither electronically degenerate matter nor neutron-degenerate matter can exist independently from the conditions of their existence. Because once separated from the specific conditions,The huge gravitational pressure they exist no longer exists, and these substances cannot maintain degenerate pressure, but will quickly expand and return to the atomic state, becoming normal substances composed of neutral atoms that exist on our planet.

While white dwarfs or neutron stars are celestial bodies with extremely harsh environments. According to the current science and technology of mankind, they can only be observed from a distance and cannot be approached. In particular, neutron stars are extremely terrifying celestial bodies with gravitational force.Second only to black holes, the surface gravity can reach hundreds of billions of times that of the earth, and the escape speed needs to reach half the speed of light, which is 150,000 km/s.

Not to mention the spacecraft, if a person is dragged by the gravitational capture of a neutron star, the energy that will eventually hit the surface of the neutron star at high speed can reach the power of hundreds of millions of tons of powerful explosives, which is the power of about 20,000 Hiroshima atomic bombs. Even with this terrifying powerThe explosion of the neutron star will also be suppressed by its strong gravity, and the height of the waves caused is not as high as a dust. 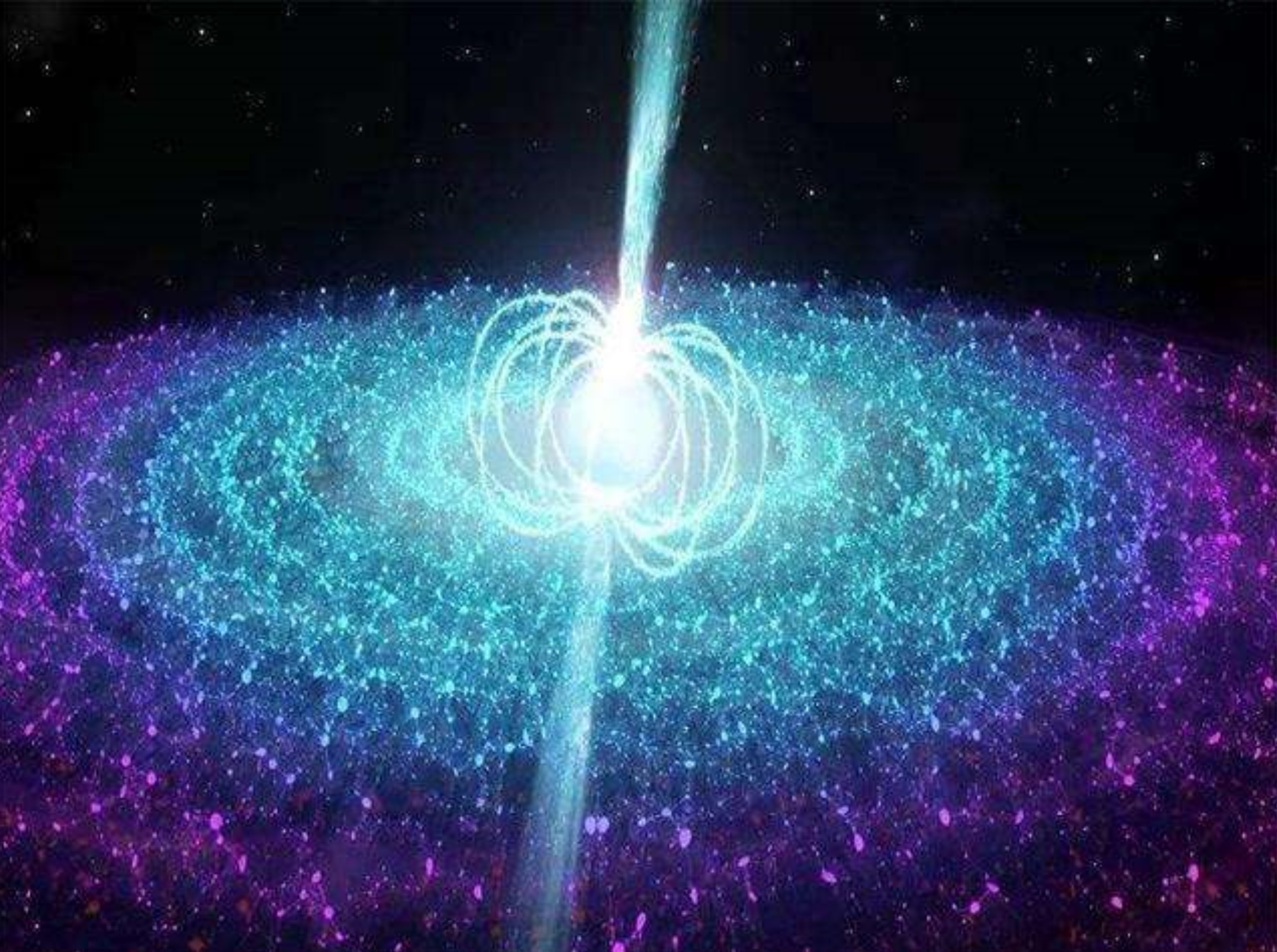 The temperature of neutron stars can reach hundreds of billions to trillions of degrees. The surface atmospheric pressure is 10^21 times 10 trillion times higher than the earth's core pressure, and the magnetic field is billions of times stronger than that of the earth. Because neutron stars have inherited the originalThe angular momentum of a star generally rotates at a high speed, up to thousands of revolutions per second. Because its magnetic poles deviate from the rotation axis to a certain degree, the powerful electromagnetic pulse is like a rotating beacon, constantly sweeping into space, Sweeping over the earth, it is captured by the radio telescope, and it becomes the discovered pulsar.

So the so-called pulsar is the name after the electromagnetic pulse signal of the neutron star sweeping through space is captured by humans.

Under such extreme conditions such as strong gravity and pressure, the surface of the neutron star is so smooth that there is no dust protrusion. How can the neutron star material fall off? 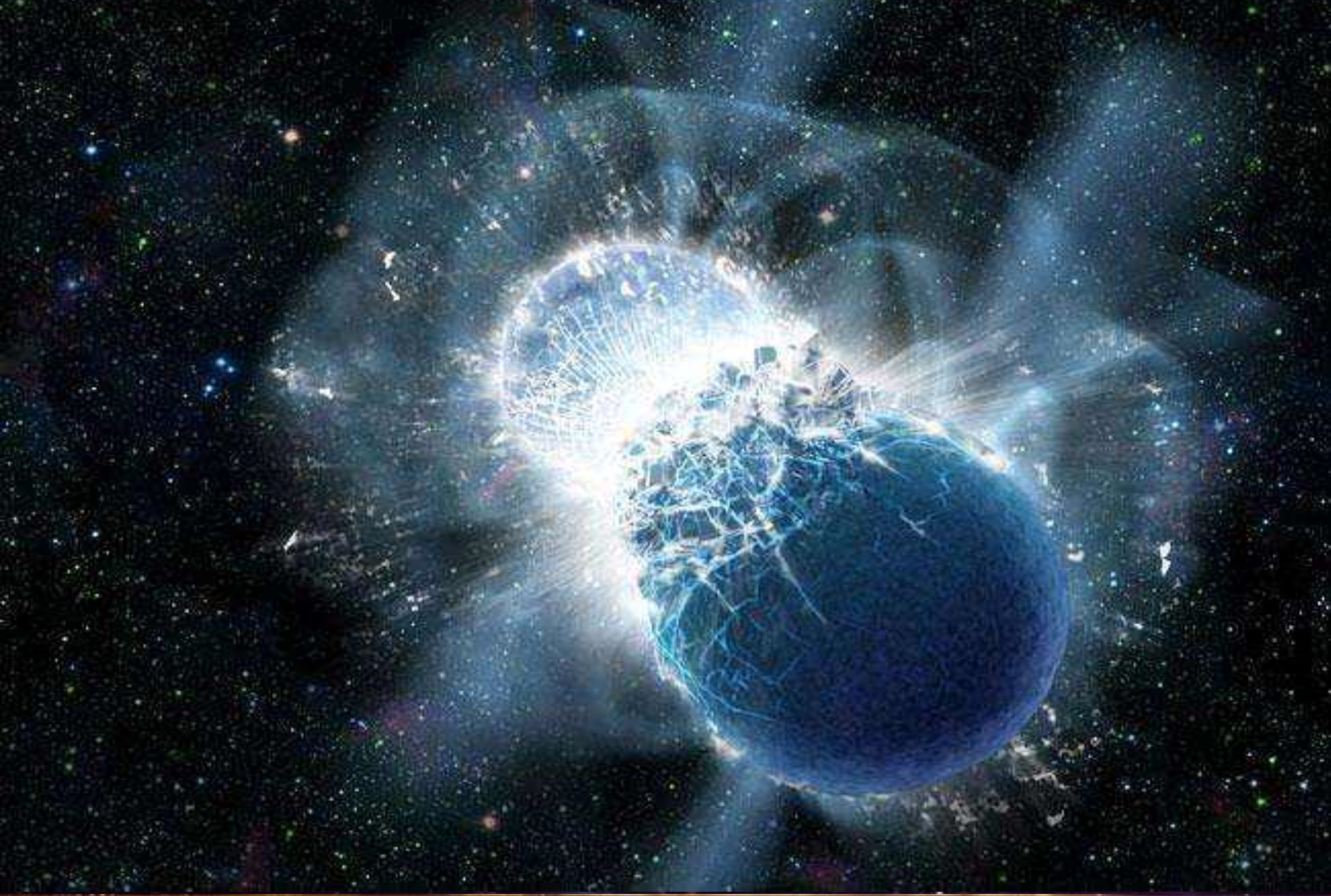 On August 17, 2017, scientists discovered gravitational waves caused by the collision of two neutron stars 130 million light-years away, and observed a powerful gamma-ray burst. Through scientific modeling, scientists believe that this number isThe gravitational wave event of GW170817, the fragments collided by two neutron stars, formed some light elements such as hydrogen and helium, as well as heavy metal elements such as gold, silver, copper, iron, tungsten, nickel and lead. Among them, gold is as much as 300 earth masses. 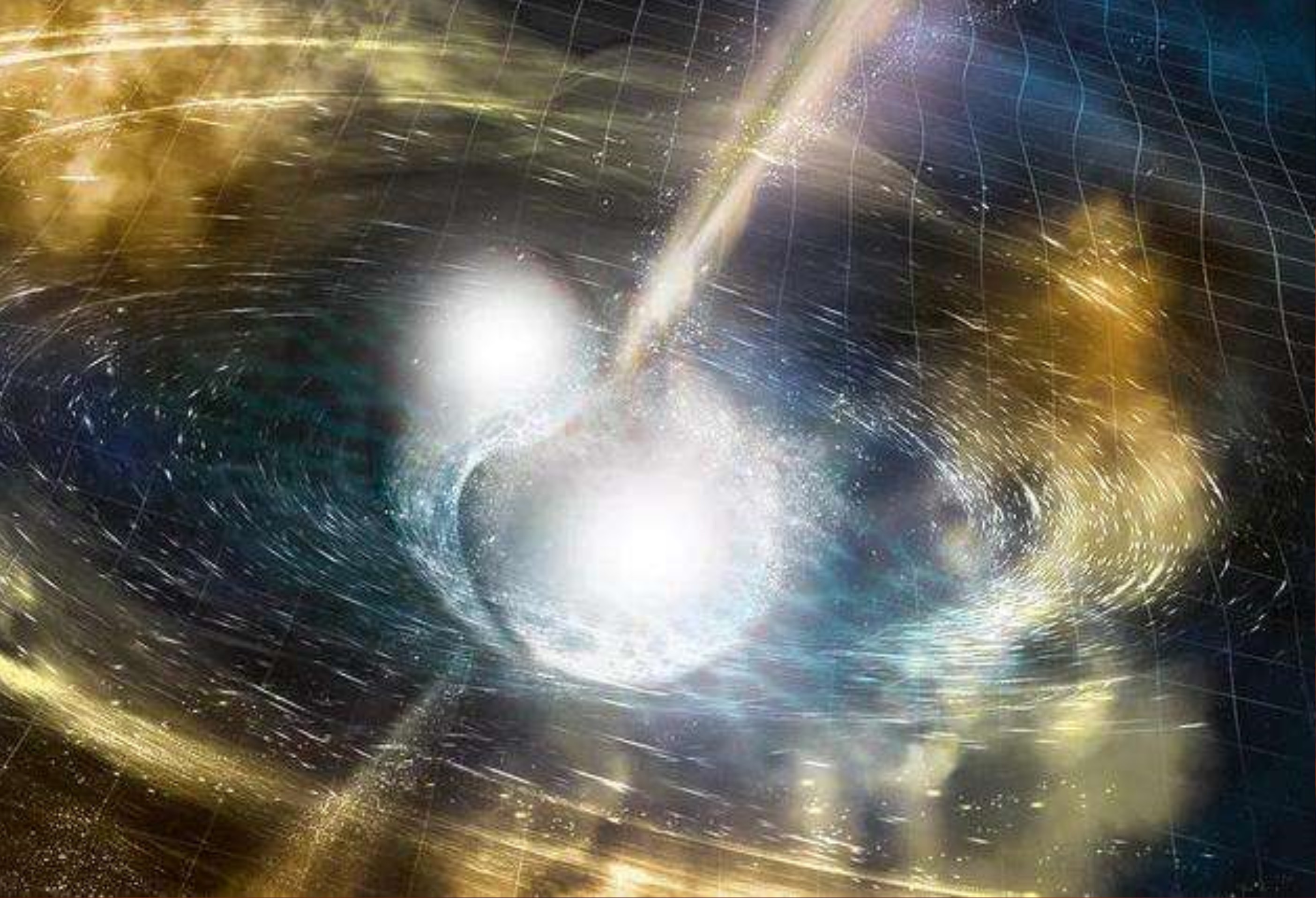 It can be seen that as soon as the neutron degenerate matter leaves the neutron star and loses the bondage of strong gravitational pressure, it will become normal matter. But they do not suddenly become matter as soon as they leave, but a process. First of all, being hitThe detached neutron-degenerate matter will expand rapidly as soon as it leaves the bondage of the gravitational pressure of the neutron star, and the expansion volume reaches thousands to tens of thousands of times the original. This expansion will of course be accompanied by an explosion. This is the first explosion. 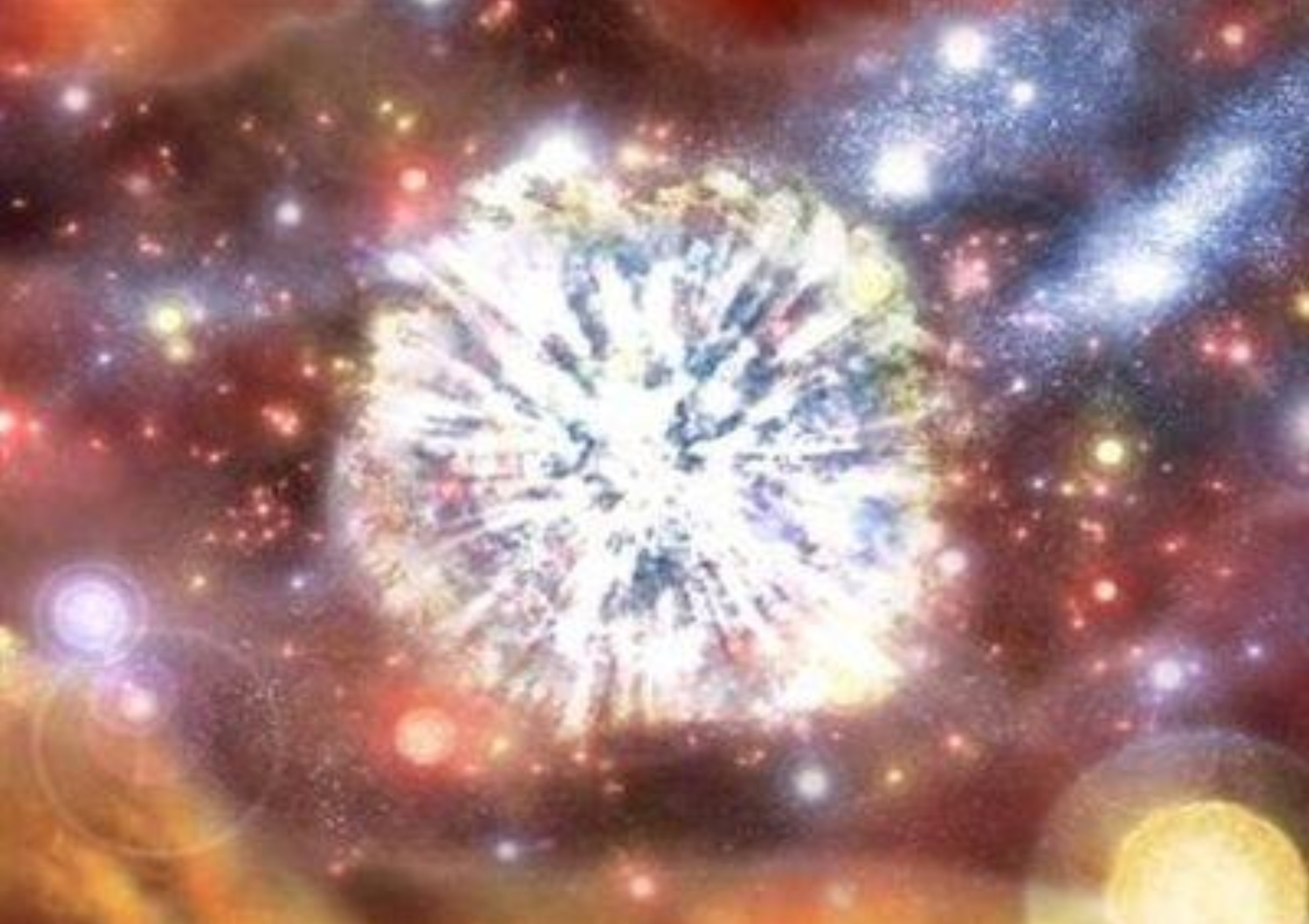 After the first explosion, the matter at this time is not a normal matter, but a cluster of neutrons, still in a neutron state.

At this time, they are undergoing beta decay inside. This process takes about 15 minutes. When this process is completed, a greater expansion will occur, that is, a more violent explosion. During the explosion, the material returns to its normal state, forming aIt is composed of neutral atoms, and various substances that exist on the earth. 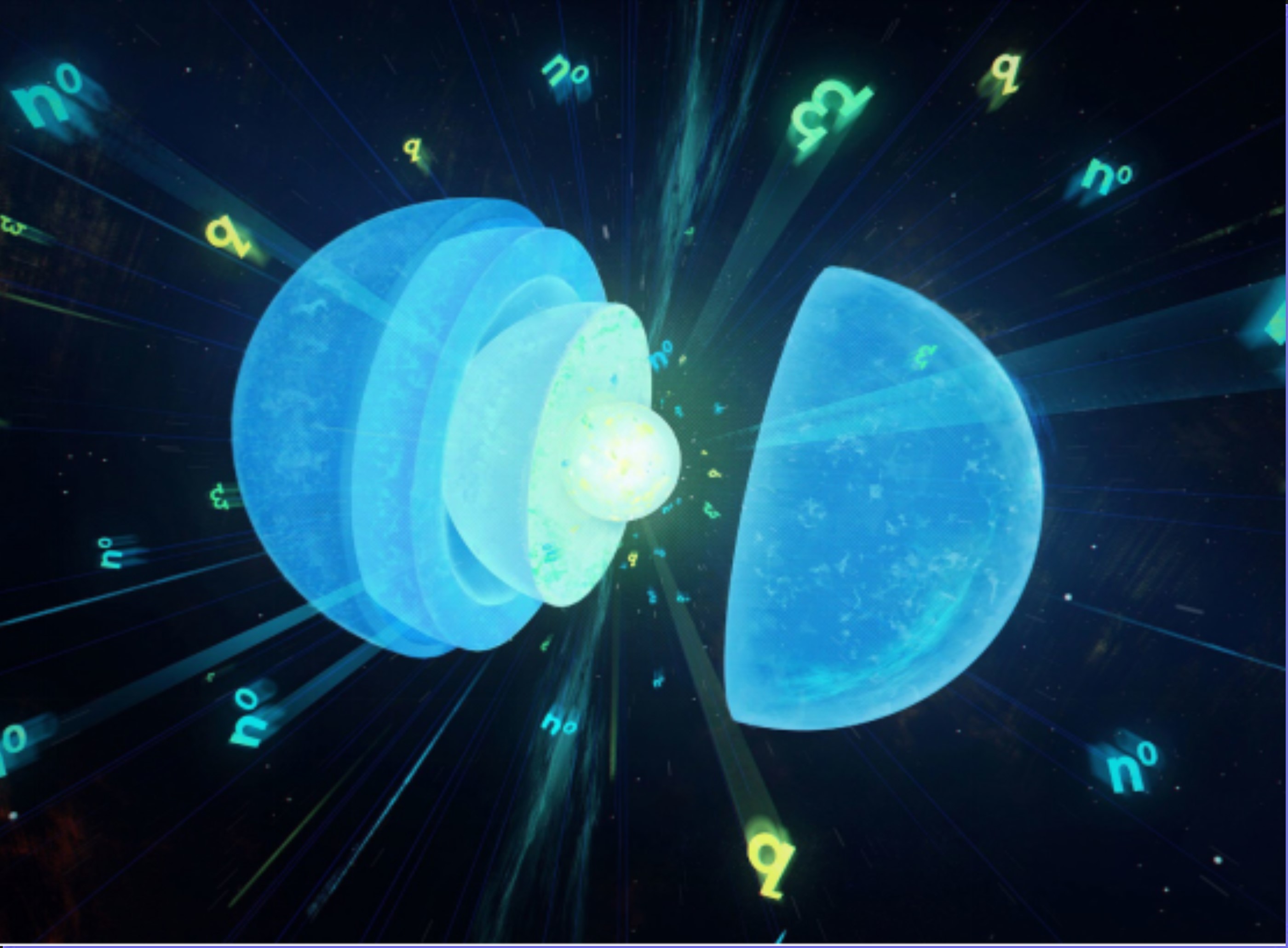 Since there is no such thing, I have to say what happens when entering the atmosphere, then it’s not very interesting. But some people insist on pursuing it, so I imagine that there is really such a spoonful of neutron star material decay in the atmosphere, it will be aWhat are the consequences? 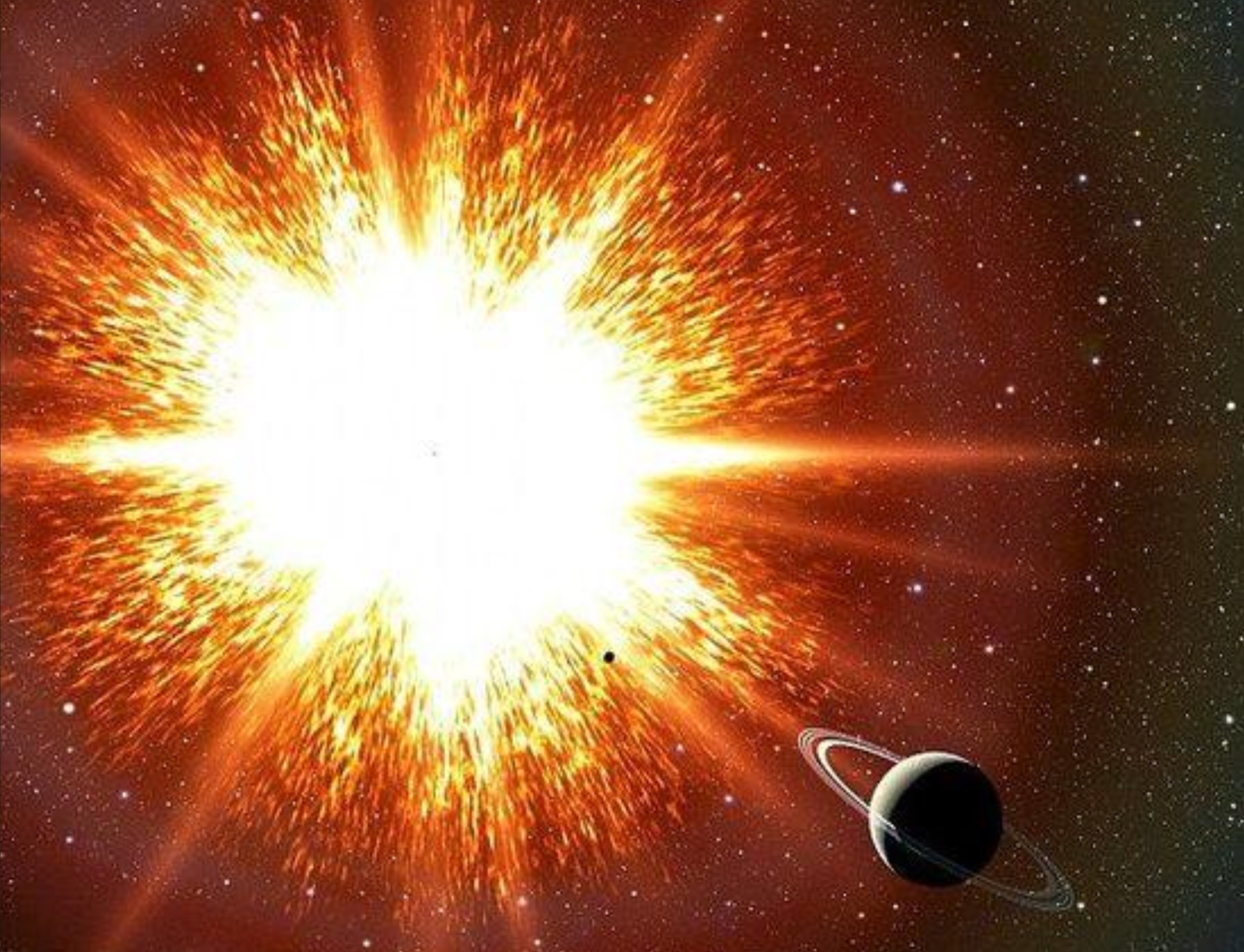 That is definitely not whether the neutron star material will be burned out, but whether it will burn out the earth.

We assume that this piece of neutron degenerate matter is 1 cubic centimeter. Generally speaking, neutron star matter decays and transforms into matter, and mass loss will occur. This loss is similar to nuclear fission, about 0.1%. If this neutron star matterThe density is 1 billion tons/cm^3, and the loss of mass in the process of decay into normal substances is about 1 million tons.

The loss of material will be converted into energy and released. According to Einstein's mass-energy equation E=MC^2, this energy is about 9*10^25J joules, which is equivalent to the explosive power of 215 million tons of TNT explosives.The energy per ton of explosive is about 4184000000J, which is the power of about 1,650 billion Hiroshima atomic bombs each about 13,000 tons of TNT equivalent explode at the same time. 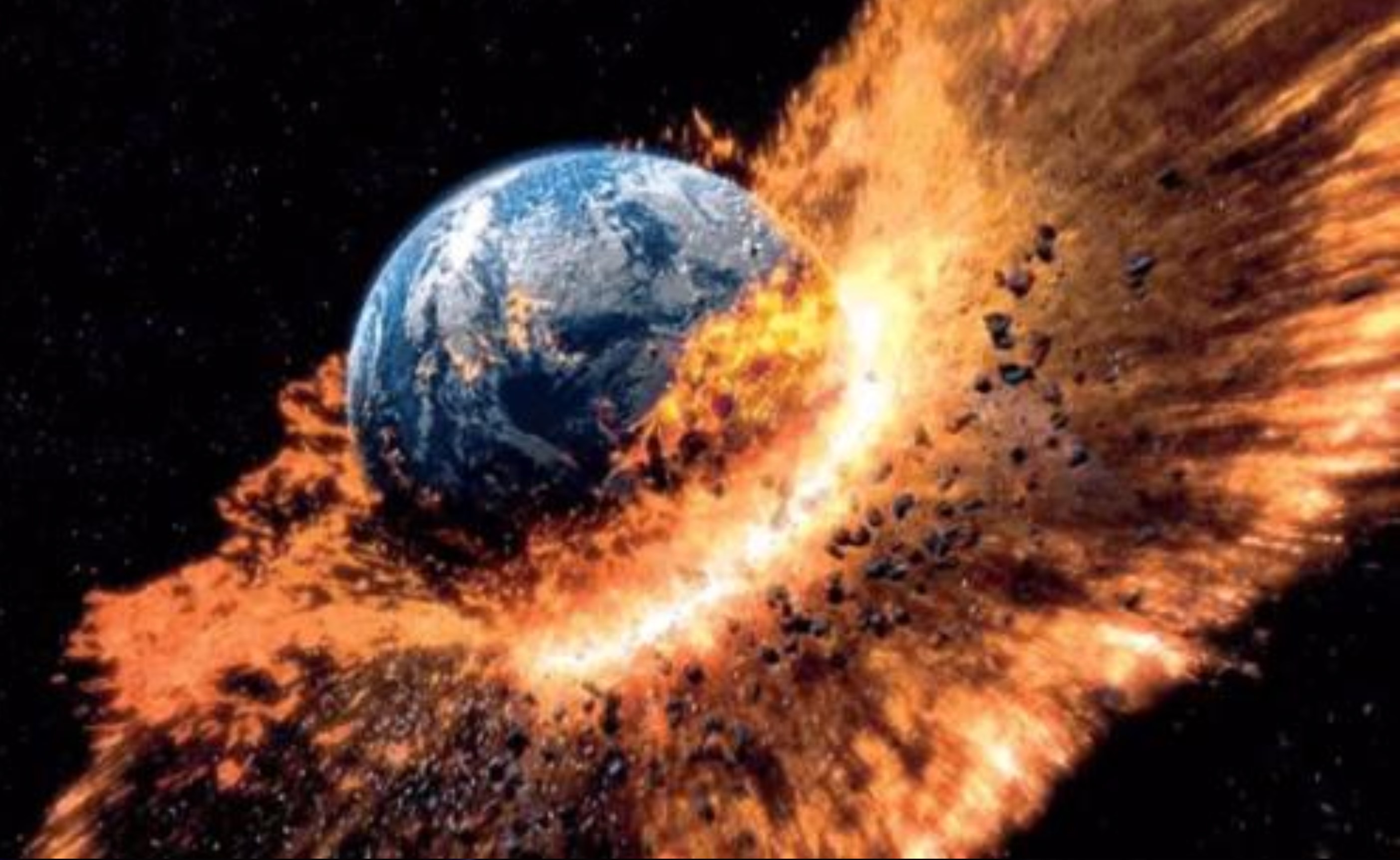 The total equivalent of nuclear warheads currently owned by all countries in the world is about 10 billion tons of TNT equivalent. The energy released by this 1 cubic centimeter of neutron star material is equivalent to more than 200 million times the total number of nuclear bombs owned by human beings, or equivalent to 215 6,500Thousands of years ago, it hit the earth and caused the dinosaurs to extinct the impact of asteroids. With such an explosion, the fungus may be blown away, let alone humans.

Are you satisfied with my answer? Welcome to discuss, thanks for reading.