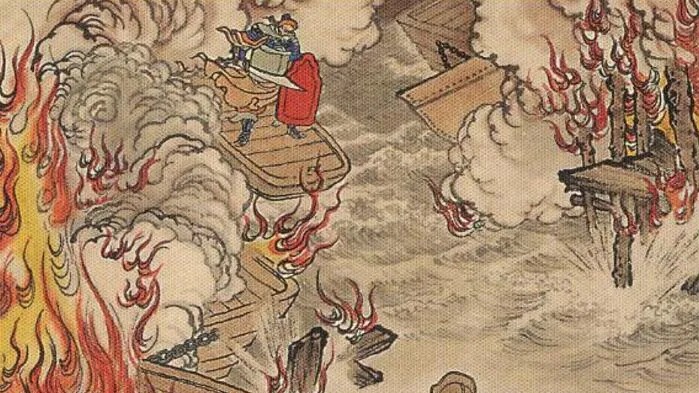 Looking through ancient Chinese history, you will find a special phenomenon: no matter what period there will always be a large number of famous battles that win more with less.

Above_ Schematic diagram of the Battle of Saarhu

Someone once counted: In the 323 years from the Western Jin Dynasty to the Sui Dynasty alone, there were 69 wars in which more than 100,000 people participated in the war, and the number of victory over a few was up to 50;Win once.

Looking at Europe, "win more with less" has become a difficult thing for Western military strategists to meet and not seek. In the Battle of Canney, Hannibal defeated the Roman army of less than 80,000 with more than 40,000 troops., Is already an incredible example of a glorious battle in the history of Western warfare that defeated more with less; Napoleon defeated 86,000 Russian-Austrian forces in the Battle of Austerlitz, also known as "victory with lessClassic". However, in the two wars, the comparison of the forces of the two warring parties is really insignificant compared to the disparity between 1:5 and 1:10 in ancient China.

Then, why is there such a "blowout" battle in ancient Chinese history that wins more with less? 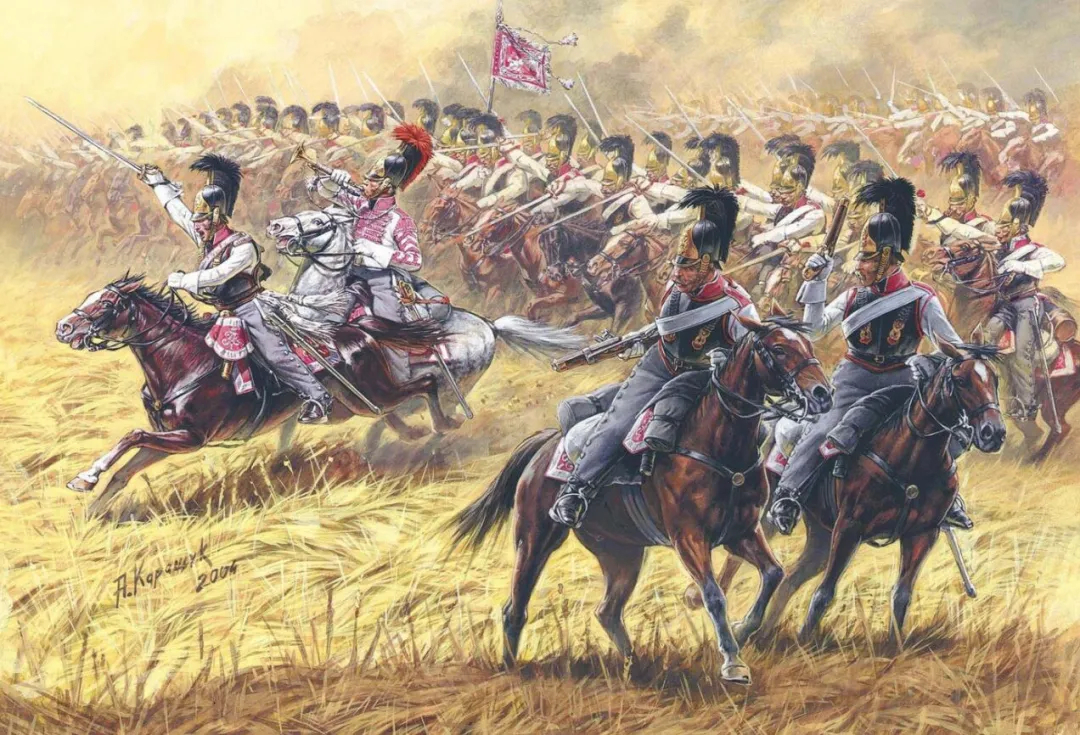 Above_War scenes in the West

First of all, for the party with a larger number of people in the battle, its strength advantage is largely propagated.

We know that due to the consistent tradition of "literati governing history", Chinese history books must use a lot of exaggerated rhetoric when writing. Therefore, the military input of both sides in the war recorded in it will be seriously exaggerated.One hundred thousand" or even "million", this is obviously not and cannot be equal to the actual number of troops.

For example, in the "Historical Records", it is said that Qin "brought a million soldiers", but in reality? When Qin destroyed Chu, he sent 600,000 troops, and almost all the soldiers in the country had been deployed."Draw two". If there are really "million", it is estimated that all adult men in the Qin Kingdom will have to serve as soldiers. Similarly, the 420,000 army of Xin Mang in the Battle of Kunyang, the 800,000 army of Cao Cao in the Battle of Chibi, Fei Shui ZhiThe 870,000 army of the Qin before the war, the 500,000 army of the Ming army in the Civil Transformation, etc., are all particularly exaggerated "imaginary numbers". 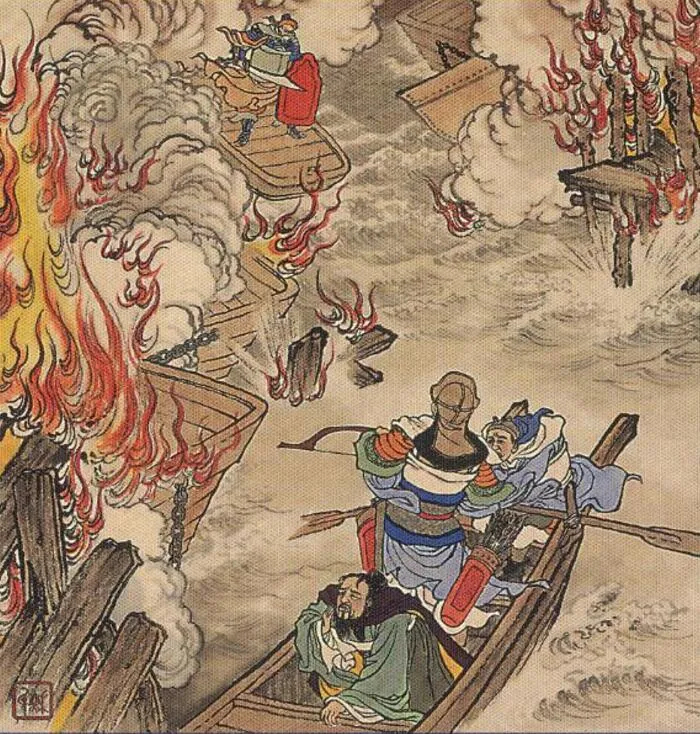 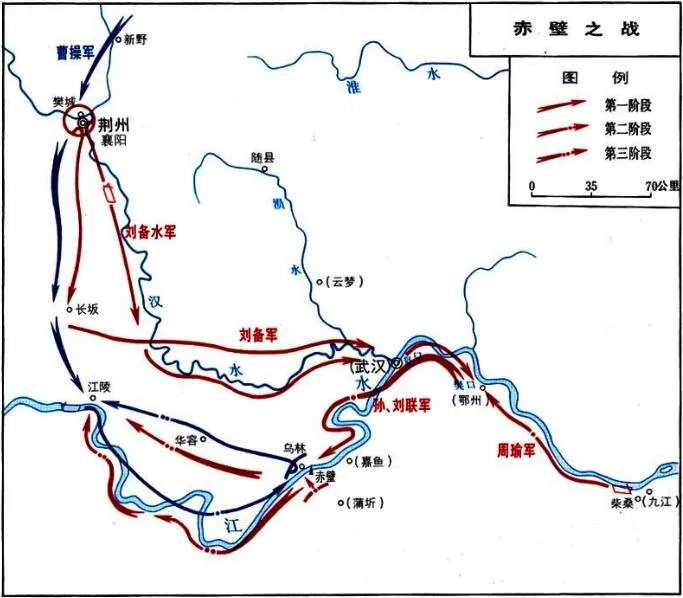 Then, why did the ancients used to use "imaginary numbers" to show the strength of their forces? Or this kind of tricks could not be seen at the time, but why was no one exposed? From the perspective of the superiority of forces, consider your own strength.The more you talk, the more you can boost morale and intimidate your opponents.

If the opponent's strength is too weak, you may be able to achieve the effect of "a soldier without a fight", why not do it? For example, before the Battle of Chibi, Cao Cao wrote to Sun Quan:Everyone, Fang and the general will hunt and Wu" Zizhi Tongjian Volume 65 is obviously using exaggerated force to frighten Sun Quan. When the pre-Qin defeated the Eastern Jin Dynasty, someone suggested to Emperor Qin Fu Jian: "If one move is one million, there must be no war.” Book of Jin? Fu Jianxia also said a similar reason. 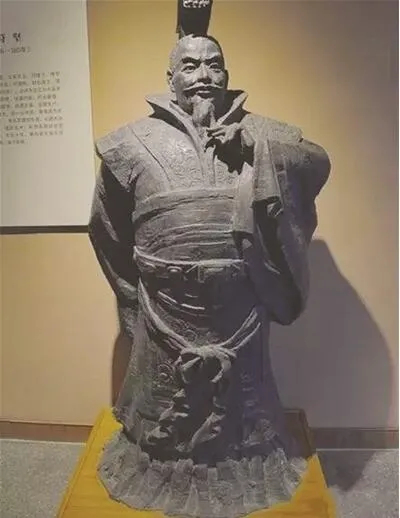 Above picture_ Fu Jian, Emperor Xuanzhao of the former Qin Dynasty 338 years-October 16, 385, with the word Yonggu, and the word Wenyu

And for the party with less strength, after winning, the opponent's strength is blown up. Doesn't it just show that he has used his soldiers like gods and martial arts? Doesn't it just mean that victory is the result of God's will and the hope of everyone? This does not matter.Is it to win the hearts and minds of the people, or to consolidate internal affairs and diplomacy?

Historical evaluation of Emperor Guangwu Liu Xiu of the Han Dynasty “has his birth in Kunyang and killed millions with thousands of people. He is not the lord of courage and wisdom, who can be worthy of it” "Art and Literature Collection" Volume 12, not just to prove Liu XiunaiIs it the true emperor? In addition, I finally won. What everyone hopes most is to receive rewards for merits and glory. Who wouldn't want to say more about their achievements?

There is a saying in "Three Kingdoms": "The old thief's document, the old one is ten, and the first level of the Yuan is the actual number." The phrase "one thinks ten" indicates that it is a common practice to exaggerate great achievements. After all.Reward and gong are linked, "Gong" is big, "reward" will naturally not be small.

So, in a sense, it is not surprising that various myths of “win more with less” continue to emerge just because the two warring parties intentionally or unintentionally “snap it off”. 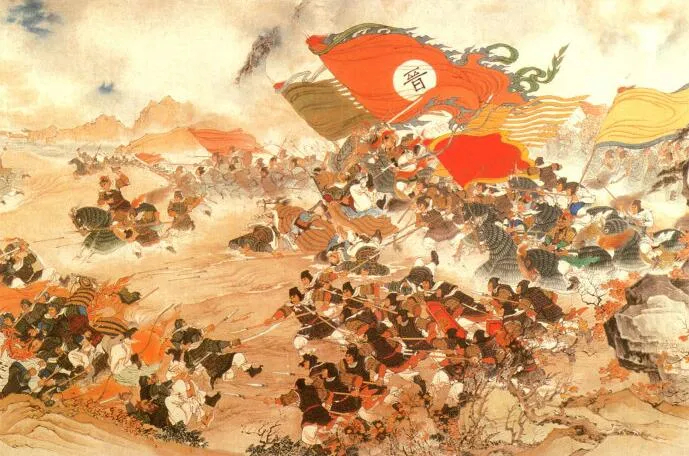 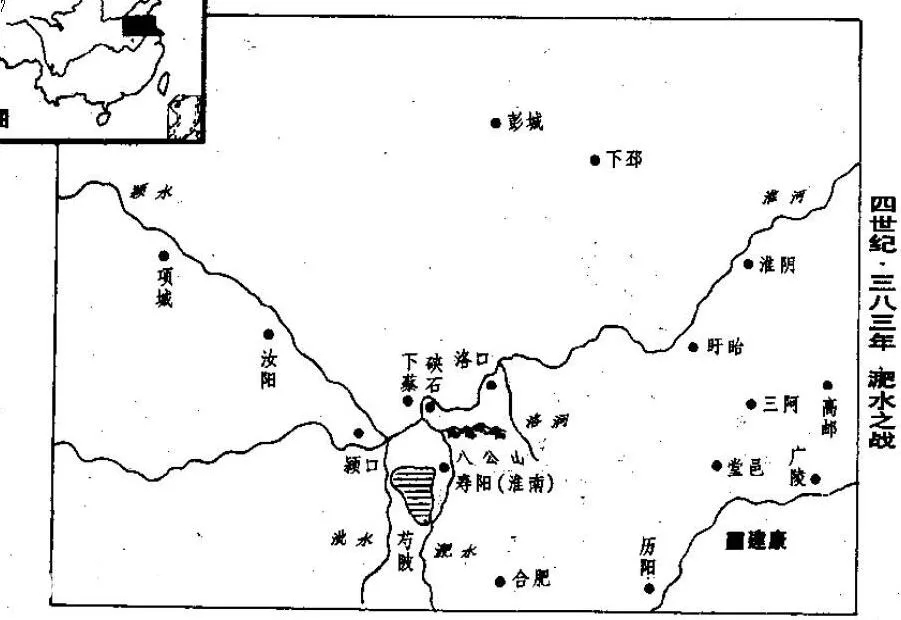 Secondly, the larger the number, the stronger the combat power is not necessarily.

Ancient wars were limited by the level of productivity and the backwardness of transportation methods. The more troops, the slower the marching speed and the worse the mobility, which often led to the inability to put all the forces on the main battlefield at critical moments. The so-calledThe strength advantage of is often only theoretical numerical advantage.

Like in the Battle of Feishui, the former Qin Dynasty claimed to have dispatched 870,000 troops, but "Jian referring to Fujian to Xiangcheng, the army of Liangzhou first reached Xianyang, the army of Shuhan went down the river, and you JizhiAs far as Pengcheng is concerned, the east and the west are thousands of miles" "Book of Jin? Under Fu Jian". When Fu Jian rushed to the front line, the army mobilized from various places were still distributed in the vast space of tens of thousands of miles between the east and the west.We don’t have to take it seriously, but the former Qin will never, and it’s impossible to concentrate 870,000 horses on the Feishui frontline.

According to contemporary scholars’ textual research, the number of soldiers and horses of the former Qin on the Feishui frontline should be between 120,000 and 150,000, which is not obvious compared with the 100,000 of the Shanxi Army 80,000 Beifu soldiers + 20,000 local armed forcesAdvantage.

We have seen many times that the side with the superior force is divided into multiple troops, and the result is defeated by the concentrated force of the inferior side. It will be ironic that the defeated coach does not understand the art of war, and even does not understand the simple truth of concentration of forces.In fact, it is not that the coach does not understand such a simple military common sense, but that in many cases, the limitations of transportation and logistics make it impossible for them to throw their troops into the battlefield at once. It is really helpless to split the troops. 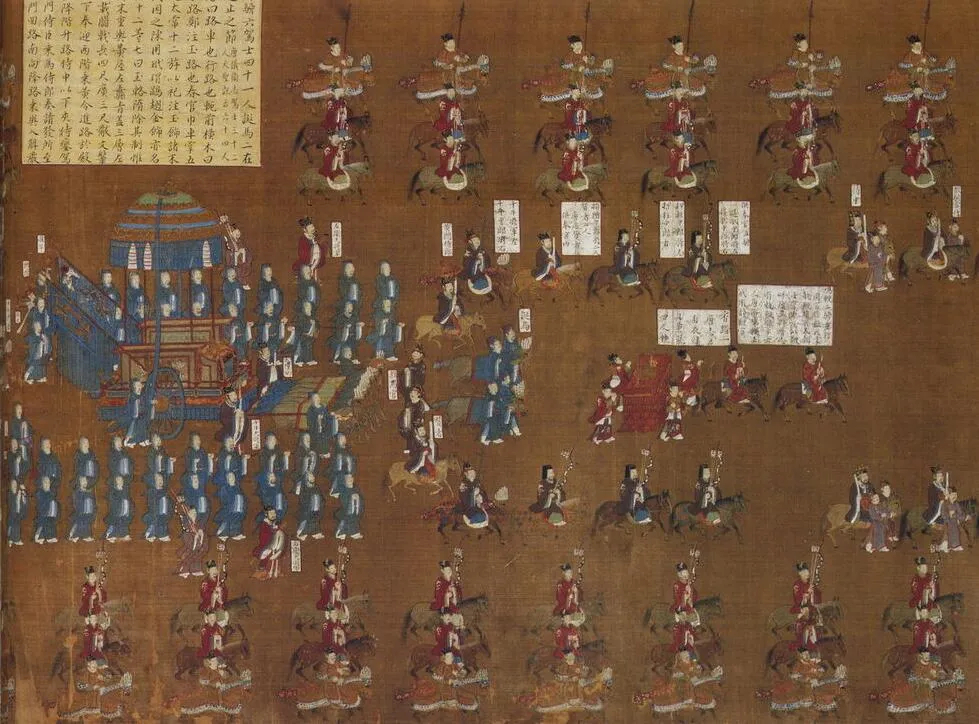 The number advantage is not the advantage of combat power. Moreover, it is subject to national power. If you expand your military power in a short period of time, you can only get a rabble of good and bad. Such an army, no matter how many people, will lose if the main force fails.It has been decided. During the Yongxi Northern Expedition, the Song Army East Route Army led by Cao Bin was the main force in the Northern Expedition. After its defeat, the Song Army of the Central and Western Routes had to retreat quickly, even the seventeen counties of the three prefectures and seventeen counties occupied by the West Route Army.Give up. The Battle of Feishui is even more so. With the defeat of Fu Jian who came to the front line, the people of the former Qin people not only scattered the birds and beasts, but also the entire Qin State became a mess.

Therefore, in ancient wars, "a million army" seemed to be an advantage, but it was not. The number advantage in the battlefield environment would have the negative effect of weakening the actual combat power. It is also because of this, the history books areIn the history of China's Cold Weapon Warfare, only a few people such as Wang Jian, Han Xin, Li Jing, and Temujin were able to control large corps of more than 400,000 people in combat and defeat them. 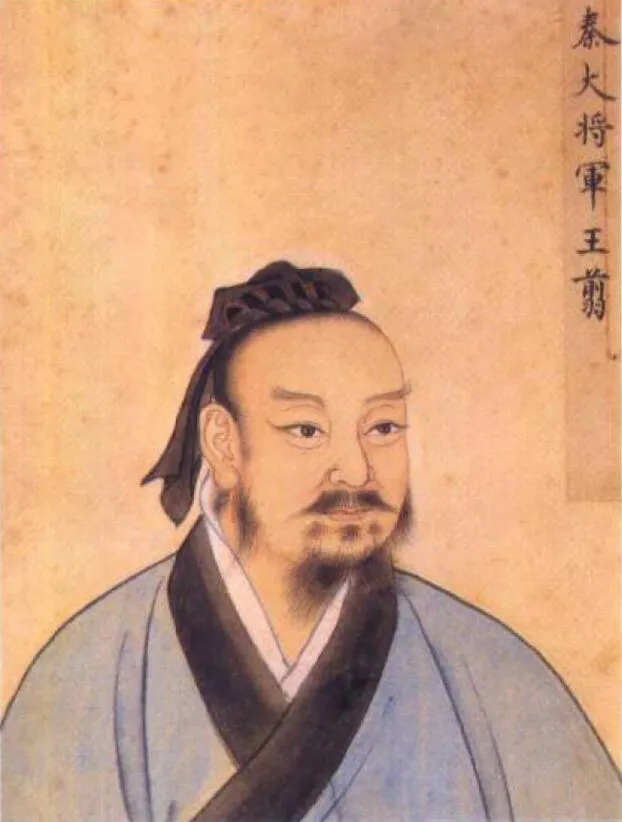 Furthermore, soldiers are expensive but not too expensive. Those with a small number of troops may not be unable to fight.

Under the ancient backward productivity level, the concentration of a large-scale army often means "patchwork", which means command confusion and difficulty in dispatching. In the battle of Kunyang, Liu Xiu led a 3,000 death squad to attackThe enemy line defeated more than 10,000 Xinmang's Chinese troops, while the other Xinmang officers and soldiers did not rush to support, but after watching Liu Xiu's performance like a general, they dispersed in a rush.

Similarly, Mr. Tian Yuqing in "Eastern Jin Dynasty Politics" also believes that the one million army of Qin before the Battle of Feishui "is just a group of new soldiers being driven, and they have no fighting ability.It is naturally impossible to make careful arrangements for it.” Therefore, when the forward troops led by Fu Jian retreated, the powerful former Qin troops collapsed in an instant. Many peasant rebels were also gangsters with "trees falling and scattered".Attributes. 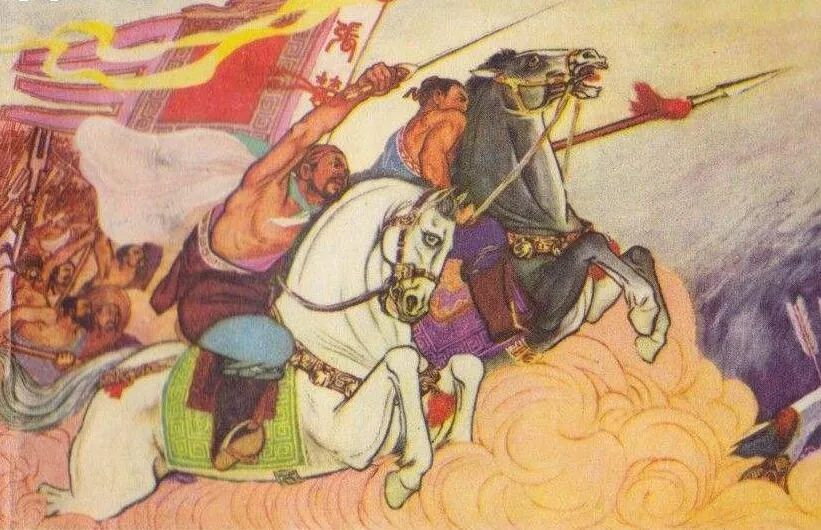 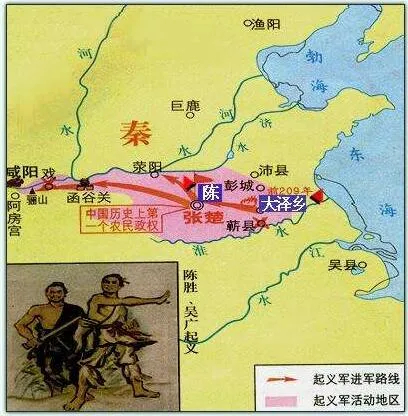 Whether it is the Chen Sheng Wu Guang Uprising, the Lvlin Chimei Uprising, the Yellow Turban Uprising, the Sun En Uprising, the Huangchao Uprising, the Fangla Uprising or the peasant uprisings in the late Yuan and Ming Dynasties, the uprising army often encumbered the refugees, hungry people, andRebellious people and even bandits, roaming horses, skirmishers, etc. are all included in the team. Apart from being a cannon fodder, these people are very difficult to use when fighting, and sometimes even lead to the collapse of the entire battle due to lax discipline. Therefore, history books often lead to the collapse of the entire battle.There will be thousands of official troops defeating tens of thousands of insurgents, even in the dangerous situation of the end of the Ming Dynasty, such battles are not uncommon.

So, the soldiers are expensive and not too expensive. At that time, Zhuge Kongming had only a field army of less than 100,000 people, but he fought "ten times the land under the world, fights and merges all the people, holds the prison city, and holds the elite."Sima Yi's "no intention of capturing the enemy, but self-preservation" is enough to explain the problem.

It can be seen that in ancient wars it is not illusory to win more with less. Behind the victory, it is often the result of a combination of external and internal factors.

〔1〕Li Shuo, "Three Hundred Years of the Civil War: China's Military and Political Power in the 4th and 6th Centuries"

2 Zhang Mingyang, "Notes on the History of Ancient Chinese War"

The text was created by the History University team, and the pictures are from the Internet and the copyright belongs to the original author