What happened before the Big Bang? Why can the universe be made out of nothing?

We continued from the previous article and said that although the Big Bang theory is our best description of the origin of the universe, various predictions have been confirmed by observations, but there are still some unexplainable problems.

Like, the horizon problem we mentioned earlier, why do we see the same temperature in all directions in the sky? There is also a flat problem, why the curvature of the universe is 0? It is unbelievable flat? 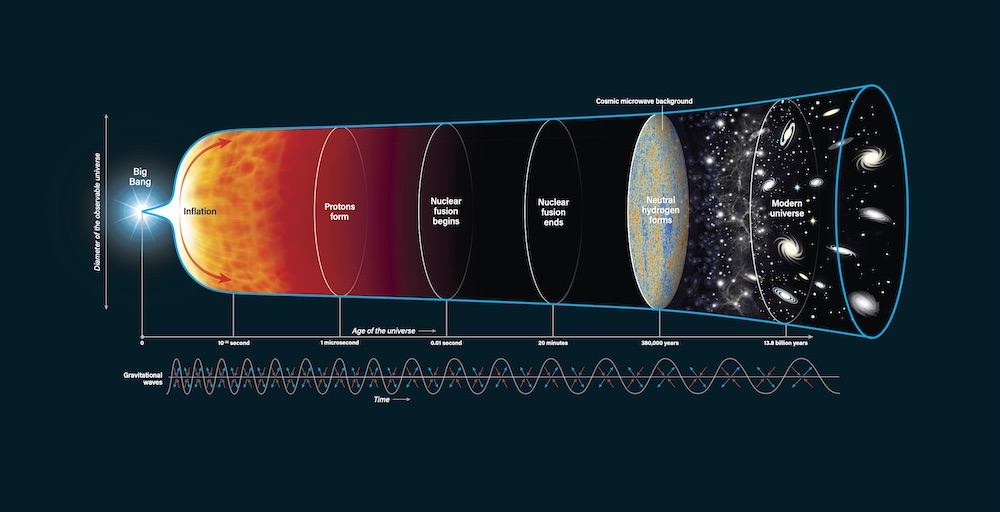 The last monopole problem, since the temperature in the early universe was extremely high, why can't we find some high-energy relics, such as magnetic monopoles? 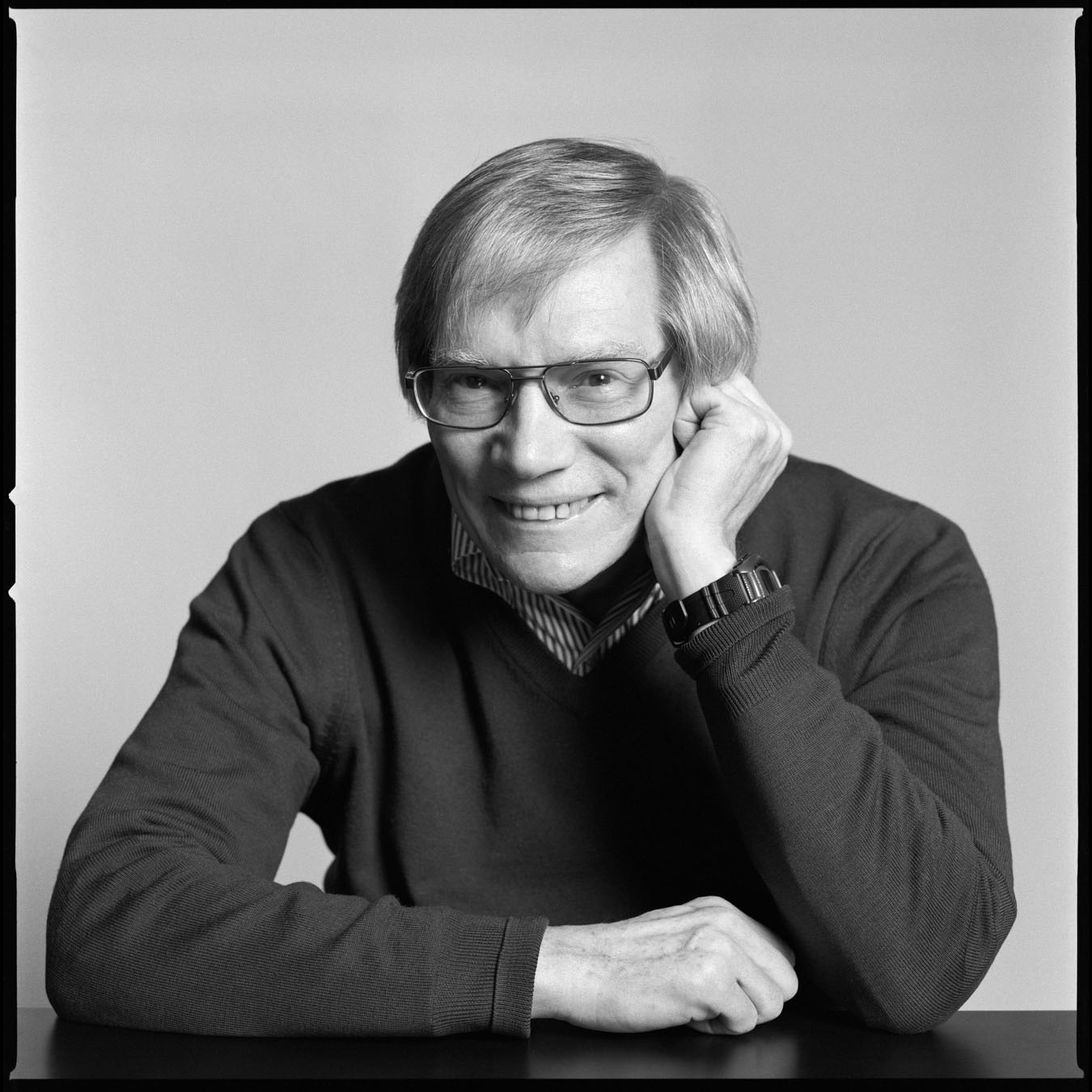 Since the late 1970s, people have been thinking about this issue. In 1979, Alan Gus, theoretical physics, also became very interested in this issue. In 1981, he published the first inflation.The model caused a huge sensation in the cosmology world.

The inflation theory believes that there was a stage before the Big Bang, that is, the inflation of space, which occurred from 10^-36 seconds to 10^-32 seconds. This is a very small period of time, although the time is short.But at this stage, the radius of the universe has increased by at least 10^50 times. What is this concept? This is equivalent to turning a grain of dust into the size of 10 galaxies.

So during the inflation phase of the universe, the space grows exponentially. After the inflation is over, the space will continue to expand, but the speed is much lower. Then the universe becomes a hot, dense, matter-filled, anti-matterAnd the plasma state of radiation. This is what we call the Big Bang universe model.

It can be seen that the inflation stage of the universe created a universe full of matter and radiation. We will talk about this later. Here, let’s talk about how the inflation of space can solve the three problems left above. 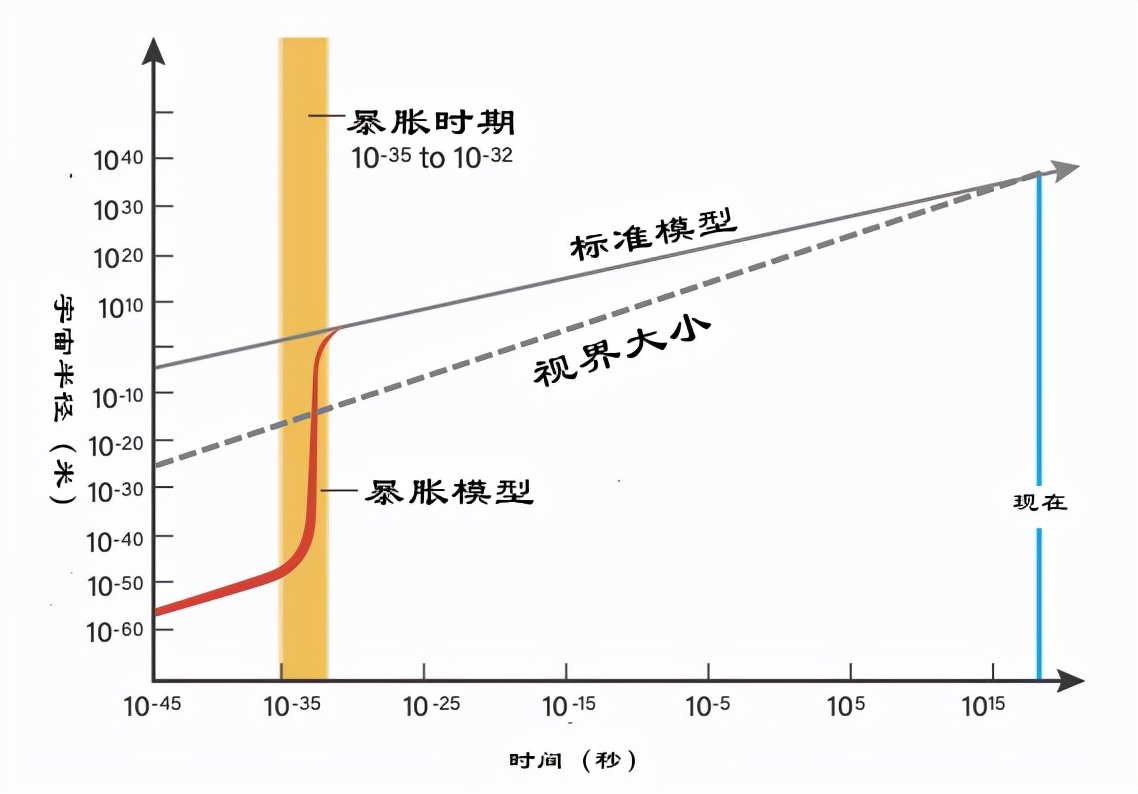 Let’s talk about the first horizon problem. The solid line in the figure represents the size of the material area over time in the standard model, and the dotted line represents the size of the horizon area. Obviously, the horizon area has always been smaller than the material area.This also shows that the expansion speed of the universe far exceeds the speed of light.

The most important thing is that from the beginning, the size of the universe predicted by the Standard Model is larger than the size of the horizon, so the universe has not had time to reach a state of thermal equilibrium. The particles in the two places are still outside the horizon of each other.The universe began to expand, causing the problem of horizon.

The solution to this problem by the inflation model is that the scale of the universe from the beginning is much smaller than the scale of the horizon, which is the red line in the figure.The information was shared between the two, but only in 10^-36 seconds, the space experienced a skyrocket, and the radius was enlarged by 10^50 times, so the two areas that seem to be separated today have the same temperature. 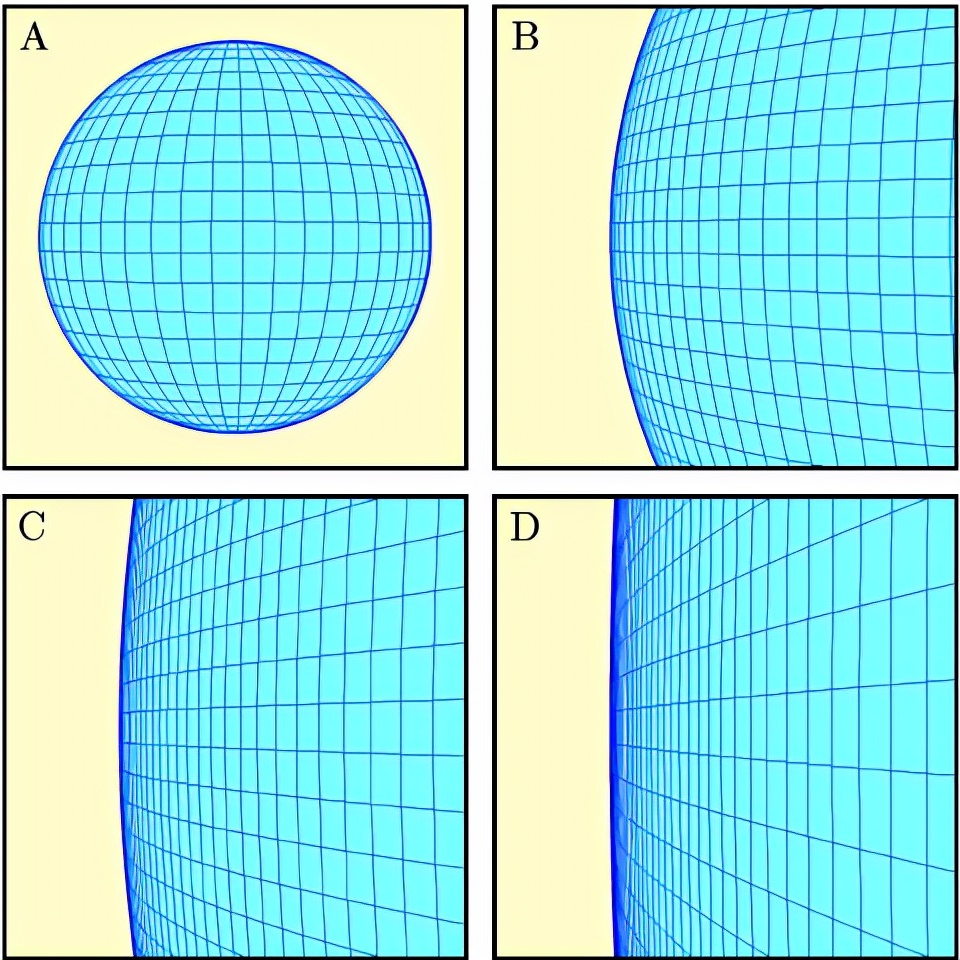 Furthermore, the problem of flatness. We believe that the curvature of the entire universe is either positive or negative. If there is no special reason, it cannot be flat, because a flat universe is a metastable that balances the density of matter and the expansion rate of the universe.State, this kind of universe is very fragile, one more atom will step on it, and one less atom will continue to expand, so we feel that the universe cannot be flat, at least it must have some observable curvature.

But the measurement results of WMAP and Planck satellites show that our universe has no observable curvature and is completely flat. What's the matter? Inflation theory can explain this problem well, he said,No matter what the shape of your universe is at the beginning, and whether your curvature is positive, negative, or flat at the beginning, after the inflation ends, the universe has expanded from 10^-26 meters to 10^24 meters, which is basically established.The scale of the universe can be observed, so after the space is stretched rapidly, it becomes very flat. 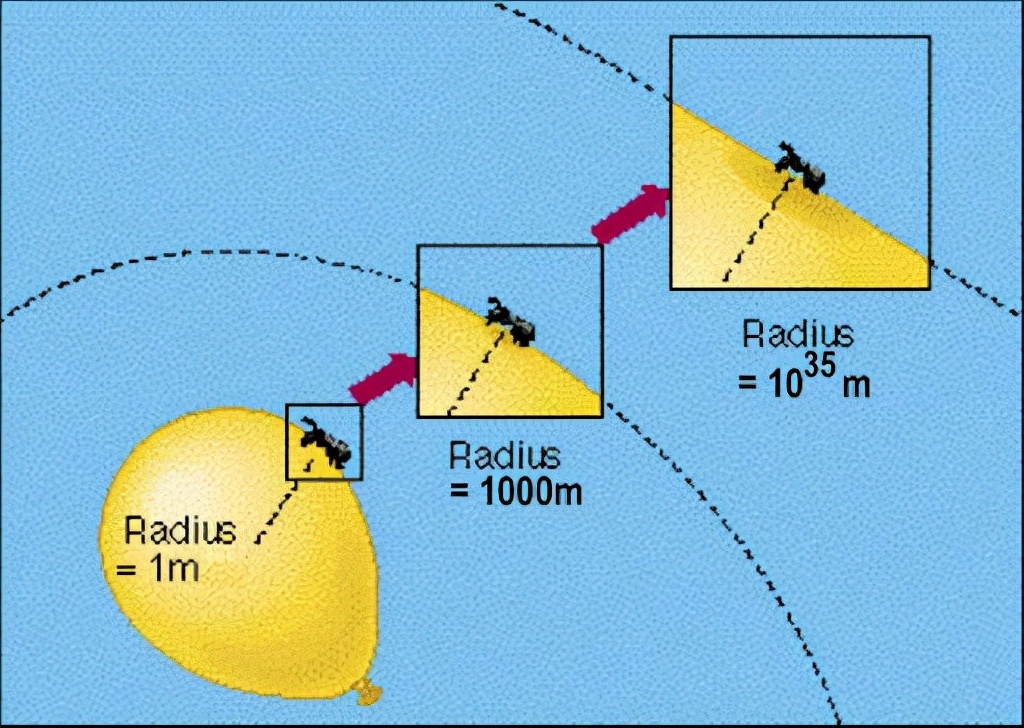 Because after the end of inflation, a part of the space energy gave birth to matter and radiation, so the temperature of the Big Bang is not without limit, and its upper temperature limit cannot exceed the energy density during the inflation period.

Therefore, some high-energy relics cannot be born at all, perhaps including magnetic monopoles. Even if they are born, the inflation of the universe will dilute these few particles to the point where we can't find them. ThisThat’s why we can’t find a magnetic monopole.

You see, adding an inflation stage before the big bang can solve the above problems well, and it can also tell us how the thermal state of the universe came from during the big bang stage?

In a word, everything we can see now comes from a vacuum. It can also be understood as being born out of nothing. It is a vacuum that gave birth to everything. Okay, let me explain below, why is our universe a free lunch?

In our opinion, an empty vacuum is not actually empty. It contains one of the most basic energy, the zero-point energy of the vacuum. This is a corollary of Heisenberg's uncertainty principle. 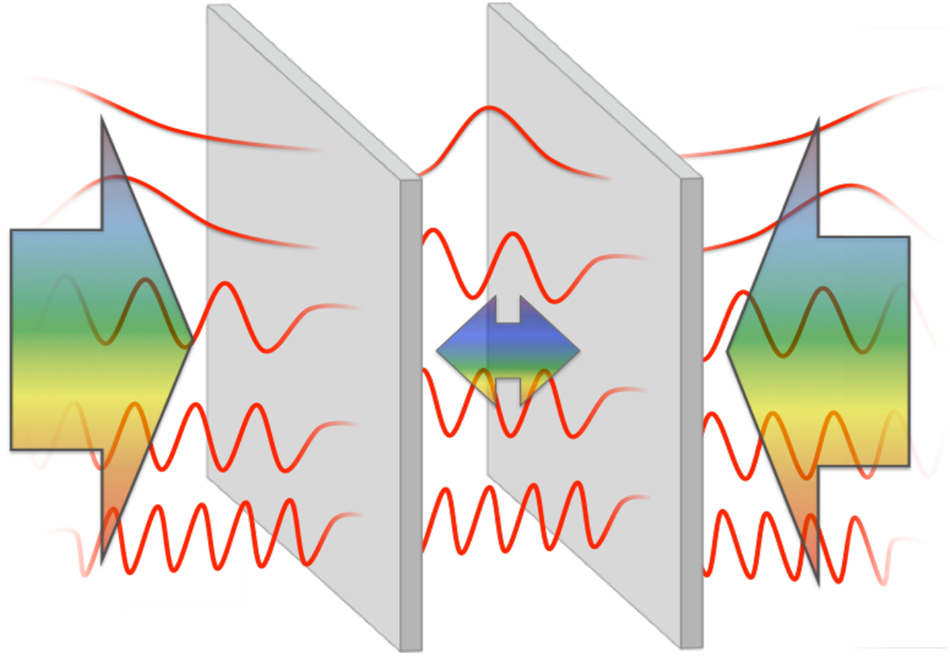 So virtual particle pairs cannot be detected directly, but we can observe their effects indirectly. For example, in the Casimir effect, we observe that the vacuum fluctuations cause two slightly separated metal plates to produceWeak attraction, this force is much greater than gravity, so it verifies the quantum fluctuations in the vacuum.

So, the current vacuum cannot create any matter and radiation, but the vacuum during the inflationary period of the universe is different from the current one. The vacuum at that time was called a "pseudo vacuum", which was an excited state of vacuum, which containedThe density of vacuum energy is higher, and this unstable state will spontaneously fall back to the ground state, which we call vacuum phase transition.

In other words, the vacuum phase at that time had higher symmetry, but this symmetry was unstable and would spontaneously break, causing this vacuum to change from one phase to another more stable and lower energy, The symmetry broken phase.

It is like a pencil standing on the desktop with a pen tip. Although it looks symmetrical, this state is the unstable state of the pencil. It will randomly choose a direction and fall down, and the pencil falling on the desktop will beBack to a stable ground state, and the symmetry is spontaneously broken, then in the process, energy will be released.

There is also the phase transition of water. At zero degrees, the ice-water mixture will tend to freeze and return to a lower energy state. In the process, it will release its own latent heat.

We believe that this kind of phase transition from a high-energy state to a ground state also occurred in the empty space in the early days. Well, let’s think about what happened before the Big Bang. 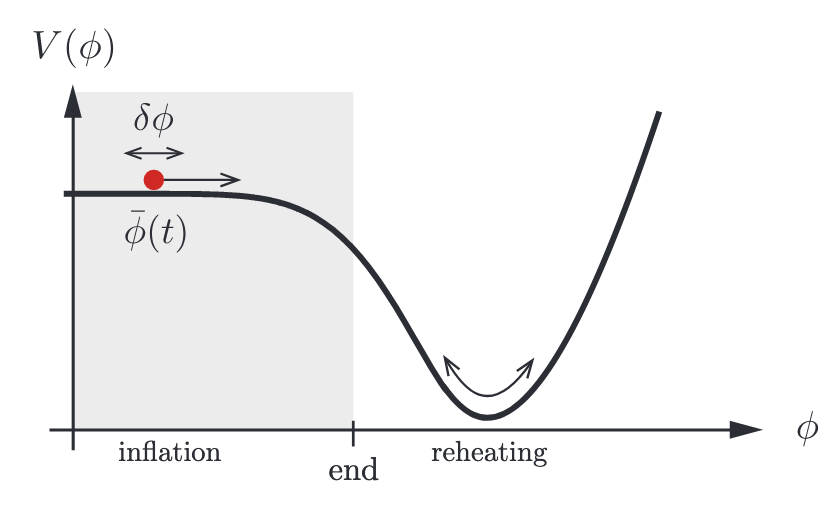 The position where the small ball starts in the above picture represents a pseudo-vacuum. At this time, the density of the vacuum energy contained in the space is very high, so a huge repulsive force is generated, causing the space to skyrocket.

But such a pseudo-vacuum is the same as a small ball. It is unstable and will spontaneously fall back to the ground state. Therefore, inflation only lasts for a short time. For the small ball, it rolls to the edge of the cliff and moves forward.If you walk a little bit, you will fall into the valley and be in a more stable ground state.

So in a short period of time, the pseudo-vacuum undergoes a phase change, and the inflation is over. At this time, the universe will release a large amount of energy. This stage is called "cosmic reheating", which is what we callIt's the big bang.

Therefore, everything comes from the vacuum of nothingness. It is the transformation of different phases of the vacuum, creating everything we see. We now also believe that the energy contained in the vacuum is the inflation that originally controlled the inflation of the universe.Field is what we call dark energy.

After the inflation is over, only a small part of the dark energy is transformed into matter, but most of it remains in the vacuum, which is our current ground state vacuum. It is currently dominating the expansion of the universe. What I said above is called slow rollThe inflation model is a better term to understand. 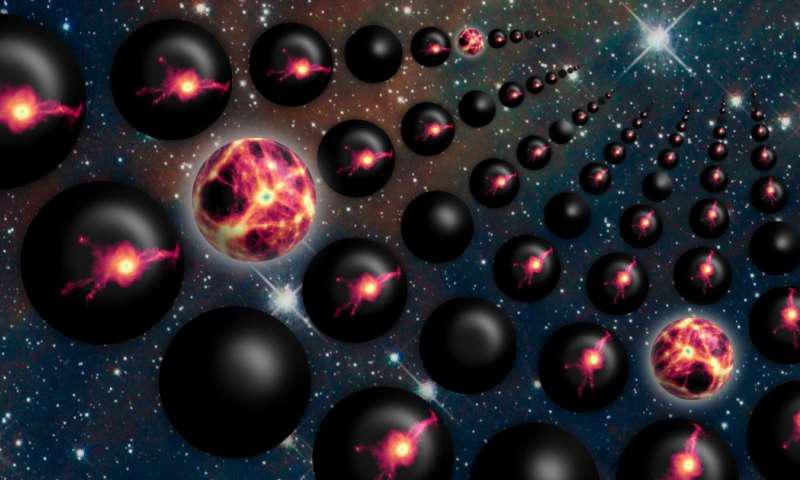 The inflation theory then brings us a new term called multiverse, which is different from the parallel world derived by Schrödinger’s cat.

Because the potential energy of the space created by the quantum field will not decrease, or even higher than before, then these created spaces will also experience the same process of inflation locally, and create space again, And then skyrocketed.

During this period, the explosion in some areas ended, the vacuum energy produced matter, and the big bang began. Some areas were still exploding, creating more space and triggering more areas of inflation, and then these areas would againAt different times, the state of the big bang was born. It is endless. This is multiverse, which is a bit like the bubble when cooking porridge. Each bubble is a universe, and each universe is independent of each other.No contact area.

The above picture illustrates this point vividly. Even if our universe starts to skyrocket from a small area, it will create a lot of independent spaces.

The red part represents the end of the space explosion in this area, the big bang started, and a universe was born. Other spaces will continue to skyrocket, and then experience the big bang, endlessly. 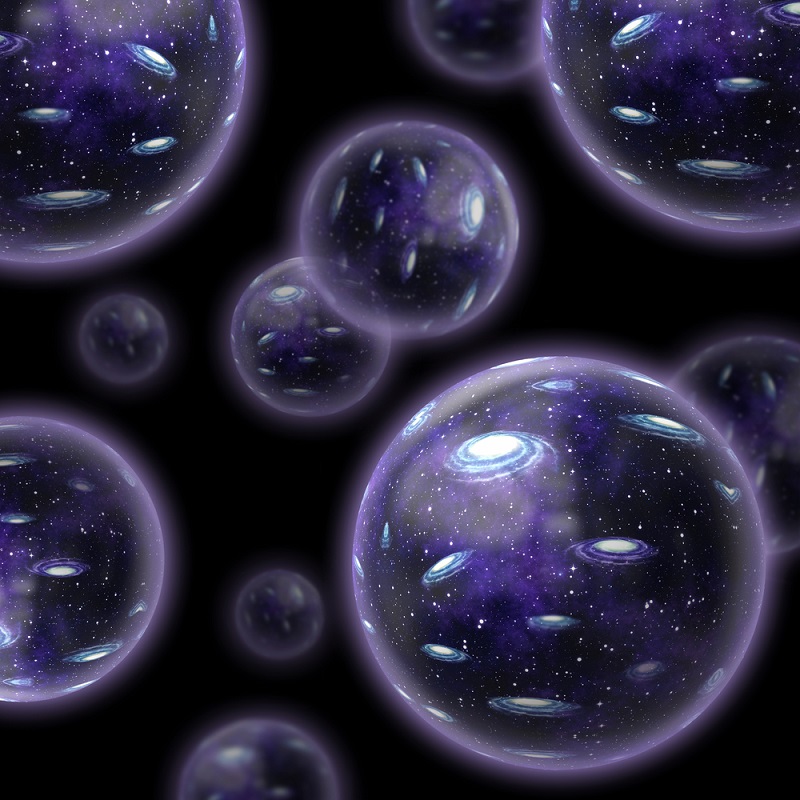 This is a very huge view of the universe, our universe is just one of many universes, and in that larger mother universe, there is still room for skyrocketing, and there is still a big bang. If this is the case,Then this is too weird to understand.

Finally, let’s talk about the two predictions brought about by inflation theory. This is what a correct theory must do. One of the predictions is the fluctuation of vacuum energy, which is stretched to a large scale by the inflation of space, formingThe uneven density distribution is the seeds of the structures of stars and galaxies. This prediction has been confirmed by observations, that is, temperature fluctuations on the microwave background.

The second prediction is the gravitational wave signal during the inflation period. By observing the polarization mode of photons in the microwave background radiation, we may find traces of gravitational waves in the future.

In general, inflation theory basically meets the elements required for a correct theory. You see, it includes the Big Bang theory, explains the three problems that the Big Bang cannot explain, and also makes some predictions., And got the evidence of observation.

The most important thing is that he told us what happened before the big bang?